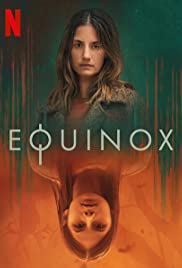 If you love Norse folklore and cults and are a fan of THE WICKER MAN or its most recent incarnation MIDSOMMAR, the new 6-part Danish Netflix show EQUINOX is for you. Based on Tea Lindberg's EQUINOX 1985 podcast, and directed by her, it stars Danica Curcic as Astrid, a young girl who was traumatized by the mysterious disappearance of her sister Ida and her school class in 1999. 20 years later, when she finds out that the only survivor from 1999 mysteriously died, Astrid sets off to discover what really happened. Curcic plays traumatized well - she's so tense she suffers from TMJ and is always rubbing her jaw, which even her mouthguard doesn't help.

It's downright creepy with a STRANGER THINGS vibe (especially as per The Upside-Down) even though you know all along what's coming - any time you have a pretty blue-eyed blonde cutie in the cast (this is Scandinavia, after all, Casting Central for Blue-Eyed Blonde Sex Appeal, a la those Noxzema "Take It Off, Take It All Off" shaving cream ads I grew up on!), you know we're talking about (spoiler alert!) Pagan Virgin Sacrifice. (Full disclosure: I'm a fan of PVS.) The blonde object of desire Ida is played beautifully by Karoline Hamm, who comes off like a sexy Anna Joy-Taylor in THE WITCH if she was raised by liberal Danish hippies instead of Protestant Bible-thumping killjoys.

And like THE WITCH, animals here take on a macabre aura - little Easter bunnies may be cute but anthropomorphic Hare Kings are NOT! Along the way we get schooled about the goddess of spring/dawn, Ostara (aka Eostre or "Easter," y'know?). (By the way, you will never think of Easter Egg Hunts the same again after this. I will now always associate Easter it with pagan sex rites and not milk chocolate bunnies and Peeps).

My only quibble was the unsatisfying ending. It's just too soft and sudden after all the intense build-up. Like Peggy Lee sang, "Is That All There Is?" Unless it is meant to hook us into signing on to a second season, I just thought the ending was anti-climatic and all too quick a cut to the end credits. That said, Viola Martinson as the nine-year-old Astrid is amazing - a young actress of exceptional presence to keep one's eye on. And fans of the "House of Cards"-style Danish political drama BORGEN will recognize a few cast members from that series here, as well, most notably Lars Brygmann as Astrid and Ida's dad "Dennis" and Hanne Hedelund as their mom "Lene."