A Celebration of All Things British 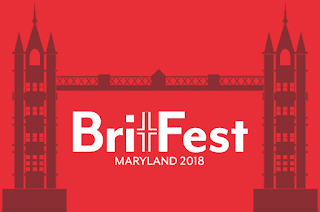 On Saturday, June 9, we ventured north to the green and pleasant grounds of the Maryland Polo Club in Jarrettsville, MD, to celebrate Queen Elizabeth II's official 92nd birthday and "all things British" at BritFest 2018. Now in its second year, organizer Hugh Anderson's "Anglophile Woodstock" gives Limey-leaning fans in the Mid-Atlantic region an opportunity to toast Britain's longest reigning monarch while enjoying a full day of events celebrating Old Blighty.


While my wife may boast that she is more English than me (41% to 38%, according to our Ancestry.com DNA results), my name alone makes me an honorary "Tommy," and together we form a powerful alliance dedicated to celebrating all things British - except, perhaps, their dental hygiene. The weather report called for thundershowers throughout the afternoon - I guess it wouldn't be a truly British experience without a downpour (and unreliable weather is the reason why Queen Elizabeth's actual April 21 birthday is celebrated in the summer, usually the second Saturday in June)  - but when we arrived shortly after 11 a.m., the sun had put the nip to any thoughts of precip: it was bright and cheery in this pastoral stretch of Harford County.


Wearing my Go Brit! t-shirt (from the famous Rehoboth Beach fish & chips restaurant) while Amy donned her classic Beatles tee (and toted her showin'-her-dad's-roots Welsh dragon purse), we proceeded to get our Brit on.

First up was listening to the Swinging '60s it's-trad-dad British rock sounds of Mrs. Thatcher, whose set list included the usual suspects - Beatles, Stones, Who, Kinks - as well as a much-appreciated mini Faces homage (hearing "Oo-la-la" and "Maggie May" back-to-back made my day!) as Amy sampled Welsh cakes and sausage rolls and I tried a Pimm's Cup. I had always heard of this English cocktail (my well-traveled brother had brought a bottle back from one his many trips across the Pond) and wanted to try one; sad to say, this traditional thirst-quencher for cricket matches was too sweet for me (though I'm sure I would have enjoyed it more last year, when the inaugural BritFest was unforgivably hot and humid).


As we walked past the various vendors (including the annoying hard-sell home improvement tent - the answer's still "No, thanks! Ta!"), we enjoyed meeting many Brits from all over the Isle (London, Berkshire, Essex, Wales), including Birmingham Brummies "Barry" (who told us his name was Celtic for "spear chucker" - alas, he left his spear back home in Reston, VA) and BCPL librarian John (a former Bookmobile driver - it doesn't get cooler in the library field than these guys!).


Following a bagpipe and drums musical prelude (courtesy of the John F. Nicoll Pipe Band), we lifted our cups to toast the Queen on her official 92nd birthday with British consulate rep David Hunt (who guaranteed another English World Cup victory - erm, wonder what was he was drinking?). Speaking of footy, Britfest presenter Hugh Anderson is a Man U supporter and their kits were the most frequently spotted, along with 2 Man City, 2 Arsenal, and a lone West Ham supporter, not to mention several England national football and rugby jerseys. (Though no one sported a Tottenham jersey, every Brit I talked football with had kind words for my Spurs; could it be that, except for Arsenal supporters, Spurs are the beloved "Ringo's" of the English Premier League that no one has a harsh word for? Hmmm, a theory...)


As the day progressed, the rains that were forecast duly came, not once but twice, turning the fields into muddy marshes and curtailing the polo match (the US was ahead 3-1 last time I looked). (Mental note: next year wear "Wellies" like the polo riders!) Good thing Amy came prepared with her emergency rain poncho and Mod English polka-dot rain cap!


As the rain poured down with a fury, like the opening scene of Kurosowa's Rashomon, we sought refuge under a nearby tent and ravenously ate not one, but two meaty-beaty-big-and-tasty "Bridies" (meat pies). Props to the Loyola University Rugby Football Club (2018 Mid-Atlantic Cup Champions!), whose rain-soaked players braved the muddy plains to take carry-out orders and return with ice-cold beers for the grateful imbibers under the big top.

We waited out the deluge while Hugh Anderson took to the stage and urged attendees to stay the course, like Churchill's "We Can Take It" retort to Herr Hitler during the London Blitz. "Don't leave yet," he pleaded. "I still need another $5 from every one of you here to break even." He went on to promise sunshine and good times by 4 o'clock, when the day's final musical act, Shag the Band, were set to perform. I must say, Hugh was true to his word, as the rain dried up and the sun reemerged on the dot of 4.


We were then once again treated to the note-perfect Post-punk/Britpop stylings (Cure, Verve, Jam, Oasis, Depeche Mode, et al) of Shag the Band (who had previously performed, along with the Beatles tribute band Beatlemania Again, at the inaugural BritFest 2017). Where opening band Mrs Thatcher left off in the '70s, Shag picked up in the '80s and '90s and their backing tape loops enabled them to replicate the keys and synths on those Verve and Depeche Mode covers.


Over the (oft times muddy) course of the day, we ran into our friends John Rose and his son, Kelly Corin Burkhead and, natch, fellow Anglophile Karen Karen & her crew; Amy especially enjoyed trading "crazy mom" stories with Karen's half-Japanese friend Margaret, who regaled us with a tale about her mom sneaking a Japanese plant back to the States concealed in her underwear! And Detectorists fans take note: I think Lance was there, as an Inca yellow Triumph TR7 was spotted among the classic British cars on display. All in all it was, as Wallace and Gromit would put it, A Grand Day Out!

Let's see, did I leave anything out? Oh, yes, yada yada yada - and Bob's your uncle!

Posted by Tom Warner, Almost Hip Guy at 5:50 AM No comments:


On our way to Rehoboth Beach for a much-needed break from work and home-repair stress, my wife Amy and I stopped in Lewes to visit the wonderful Biblion (meaning "little book" in Greek) used bookstore on the corner of Second and Market Streets. Since discovering this treasure trove of contemporary and antiquarian books (not to mention the best greeting cards and buttons) in the heart of historic downtown Lewes, it has become a regular stop on our Lower Shore getaways. Once inside, we noticed a sign that said a record store was around the corner. Cool, we thought, let's check it out, for we love records as much as we love books. (Yes, we are from the pre-digital streaming Physical Media Era.)


Walking around the corner to Market Street, we descended the stairs and immediately heard a familiar-sounding "non-Kansas" Kansas accent. "Hey, that lady sounds just like the Biblion owner," I commented. "That's because it is her," observant Amy observed.

Vintage Underground is split into two rooms. On the left, before you enter the record store proper, is a room full of men and women's clothing ranging from mid-century to the 1990s, with selected vintage pieces mixed in. As Mason explained to Cape Gazette writer Nick Roth ("Vintage Underground is hip new Lewes Shop," May 31, 2018), Vintage Underground is not a thrift or secondhand shop; she picks out all the clothing and music herself. And, sign-o'-the times, clothing is not separated by gender: "It's wear what you like. We have tops and tops."

Given my wife's flair for fashion, needless to say it took a good 30 minutes before she was able to pull herself away from the clothing racks to the music racks, where the collection includes a mix of new vinyl records from independent labels (like Jack Black's outstanding Detroit-based Third Man Records) and a carefully curated selection of used records. Mason takes pride in the shop's collection of jazz, blues, funk and soul - as well she should. Her Blue Note/Verve Jazz selection alone was worth the trip, and Anglophile Amy naturally managed to uncover a British Invasion compilation CD of bands appearing on the Ed Sullivan Show. And as an Elvis Costello Completist, Amy also had to pick up the soundtrack to Wim Wenders 1991 film Until the End of the World because it had an Elvis song she didn't think she had (Elvis covering Ray Davies' "Days").

I went hog wild when I discovered a CD cache of Rhino's long-out-of-print New Wave Hits of the '80s because, well, where else am I gonna find digitized versions of oddball singles like The Normal's "Warm Leatherette" or Flying Lizards' "Money (That's What I Want)"? But the real find for me was scoring The Flashcubes' Bright Lights, an anthology of  21 punk-powerpop tunes by this classic '70s Syracuse rock group, who I had previously only heard one song by ("It's You Tonight" on Yellow Pills Vol. 1). All of these CDs were steals at $5 a pop. 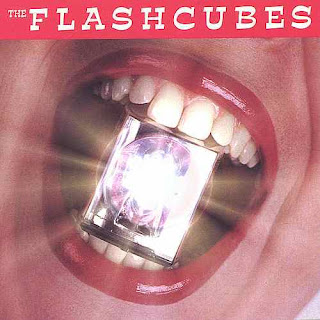 Vintage Underground's decor is creative, the vibe is fun, the hip factor is off the hook, and the owner is genuinely warm and engaging. And in honor of Miles Davis's Memorial Weekend birthday, Jen told me that if I said "Happy Birthday, Miles!", she would give me one CD for half-off - I did (I chose a Dexter Gordon CD - I think both Miles and my dad would approve) and she did. Hey, that's swell! 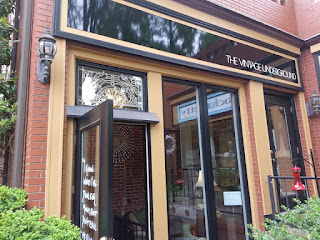