Boy-o Boyreau! Taking Out the Trash...

...And Picking It Up with Jacques Boyreau 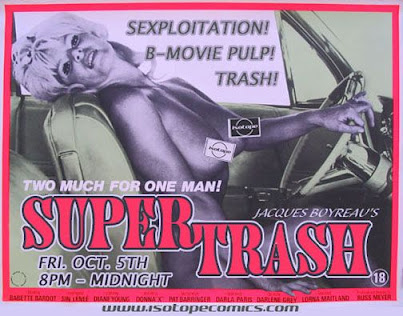 "Long past its pioneering years, glory years, and weird years, Hollywood Product favors inbreeding and multiple anti-climax, becoming a feedback loop of let-downs. Grand survivor, regardless of who's boss, Hollywood knows where to pillage. It goes to Xploitation Cinema for goods." - Jacques Boyreau, Trash

One man's trash is another's treasure trove and in the case of Jacques Boyreau, erstwhile hipster-curator of San Francisco's Werepad multimedia facility (home to the Cosmic Hex Archive of Xploitation film prints and posters and Massacre at Central Hi production company, as well serving as as a one-time movie theater, beatnik space lounge and performance space), it amounts to a post-modern aesthetic. Semiotician Roland Barthes found primal meaning in the literary and artistic "signs" of Western popular culture; Boyreau finds them in movie posters and lobby cards. But whereas Barthes' eye focused on the high-brow, Boyreau's gaze is locked on the lowest of the low: "Xploitation" movies.

Boyreau is the author of several "books" - Taschen-styled visual collections of movie posters and pop cultural detritus peppered with sparse but superbly spot-on descriptive text - starting with Trash: The Graphic Genius of Xploitation Movie Posters (2002, Chronicle), the book that became "a prophecy of the lasting influence of grind-house and a model describing the shared evolution between art and trash." What Danny Peary called "Cult Movies" and Michael Weldon called "Psychotronic Video," Boyreau sweeps into the collective dustbin he calls Trash. I was elated to discover that my local library actually owned this low-brow 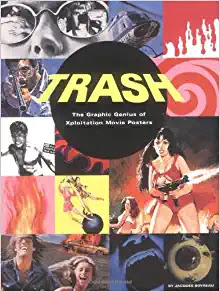 Though his comments tend to be scattered sporadically throughout his profusely illustrated books, when he does speak, Boyreau's words flow with the spirit and over-caffeinated energy of a Beatnik poet or speed freak. Here, Boyreau states his case and defines "trash" in his introduction:

"At the level of pure pleasure, our premise is simple: Look! Trash's graphic zeal shows, in comparison to the 'headshot' poster design of today: how a great commercial art form has palsied. Buried in art-by-committee gulags of market research and corporate niggling, the spirit of the sell and the integrity of schlock are hurting. Creative tag-lines, psychedelia, op-art, punk cut-and-paste, jazzy segmentation, cartoon intervention, color riots, and brazen minamalism have all been dumped. Movie poster ballsiness is, like, snuffed.

But let us penetrate a few years into the past, into the dark-sun realm of Xploitation. there are those of us, filmmaker and citizen alike, who have no forgotten. They tried to nail us with their dupe-guns, but they missed. Relax, buddy. Help is on the way.

Shared voyeurism, after all, is the current between aesthetics and audiences. Our trawling trash-eye seeks Sex-and-Violence (which is like one word to me). Avoiding the Hollywood bootlick, Trash presents Smut and Convulsion...Glamour and Horror...Action and Madness.

So ponder Trash. Ponder obscure film companies like Rio Pinto, Fanfare, Aurora, Magna Pictures, Brigadier, Gienie. Begin the mammoth count of big-studio excursions into Xploitation. Study the silk-screen beauty of posters like Pretty Poison, the spirographs of Twisted Nerve, the ropy mess of Squirm. Delve into the warped minutiae of the lobby card for De Sade. Realize our indebtedness to the last run of proactive studio Xploitation: Avco-Embassy's early-'80s output (Escape from New York, Dead & Buried, The Howling, Vice Squad, Night Games, Scanners). And once you sign on, dig our favorites: Strother Martin in The Brotherhood of Satan and Sssssss; Susan Cabot in Sorority Girl; Maury Dexter; Thalmus Rasulala; William Grefe's The Hooked Generation; and the tag-line for Black Cobra: 'How Much Snake Can One Woman Take?'...

...If  I could stress one conceptual point, it would be the 'pre-irony' characteristic of these films. These days irony eats its young; hence the surfeit of cutesy-wutesy, post-modern Clever and Soulless pictures. Xploitation offers a naivete and dependability I find fascinating. Seek its silly charms and cheap passageways, its many jugs of innocence, and the way it pops your guts. Ah yes, but did I mention this line from Psyched by the 4-D Witch: 'How AWFUL and DISGUSTING and NOW WHAT!?'"

Boyreau goes on to divide his visual tome into a half-dozen subcategories: 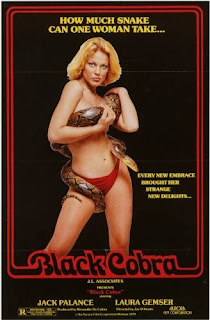 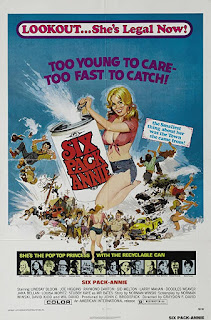 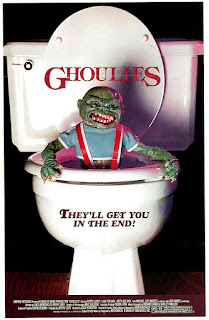 In SuperTrash, the "mutagenic" sequel to Trash, Boyreau gazes at the "gonzo archives" of 20th-century design in pursuit of what he calls "more bionic art-agony and trash-ecstasy." Serving up a mixture of both traditional movie signage and transgressive shout-outs, "SuperTrash collages a trail of freakish delights and intellectual spin-kicks that track the co-dependencies of art and trash through sly, uncompromising essays about new wave hookers, bad gods, hermaphro chic, and, of course, Lee Marvin. Part psychedelic psychotronic, part poster poster book, part album cover book, part paperback pulp book: interdisciplinary, quantal, and polyglottal, SuperTrash is surrealism for the 21st century." 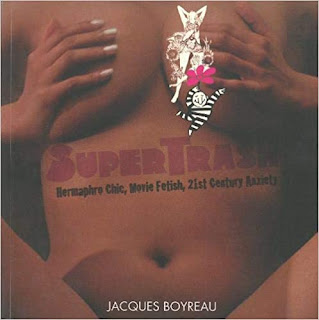 More on SuperTrash next time!

[An edited version of this post was originally written for my library's blog.]

Ruth Bader Ginsburg, the US Supreme Court Justice whose pioneering advocacy for women’s rights and championing of liberal causes (from abortion rights to same-sex marriage) elevated her to late-life “rock-star” status as a cultural icon known to her admirers as “Notorious R.B.G.,” died at her Washington, DC home on September 18, age 87. Though the cause of death was complications from metastatic pancreatic cancer, Ginsburg had long suffered from health problems, having previously beaten colon cancer in 1999, early-stage pancreatic cancer in 2009, and early-stage lung cancer in December 2019.

When a cultural icon’s life spans nine decades, it’s hard to do it “Justice” (sorry!) in a mere blog posting. So to learn more about Ginsburg’s extraordinary life, be sure to check out the many print and media resources about her available from Pratt at the end of this article.

When President Bill Clinton chose her to replace Justice Byron R. White in 1993 (Joe Biden was Chairman of the Senate Committee that confirmed her by a vote of 96-3), Ginsburg became only the second woman to serve on the Supreme Court (after Sandra Day O’Connor) and the first Democratic appointee since Thurgood Marshall in 1967. New York Times writer Linda Greenhouse found that succession telling:

“There was something fitting about that sequence, because Ginsburg was occasionally described as the Thurgood Marshall of the women’s rights movement...The analogy was based on her sense of strategy and careful selection of cases as she persuaded the all-male Supreme Court, one case at a time, to start recognizing the constitutional barrier against discrimination on the basis of sex. The young Thurgood Marshall had done much the same as the civil rights movement’s chief legal strategist in building the case against racial segregation.”

Her “Notorious RBG” handle was a play on the name of rapper The Notorious B.I.G (Christopher Wallace, aka “Biggie Smalls”) who, like her, was a native of Brooklyn, New York. It was NYU law student Shana Knizhhik who first coined the “Notorious RBG” moniker with the launch of her Notorious R.B.G. Tumblr page in 2013. And, just as unlikely as it was for a frail 5-foot-tall, 100-pound white woman to be compared to an imposing 6-foot-2, 395-pound Black rapper, if only by name, also improbable was Ginsburg’s surprisingly close friendship with the late arch-conservative Supreme Court Justice Antonin Scalia. They frequently argued on opposite sides of the law, but both shared an abiding love of opera and Scalia admired his colleague’s tenacity in the courtroom, calling her a “tigress on civil procedure...She will take a lawyer who is making a ridiculous argument and just shake him like a dog with a bone." 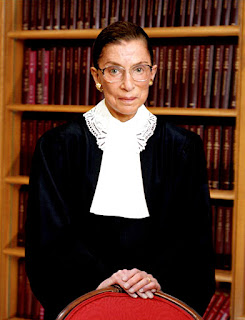 RBG: A small frame but a firm backbone
She may have been small, but her diminutive frame contained a firm backbone. Ginsburg won five of the six cases she argued before the Supreme Court as a young lawyer, and though she had a number of landmark wins during her subsequent 27-years sitting on the Bench - her majority opinion challenging the all-male admissions policy of the state-funded Virginia Military Academy helped open the doors to women everywhere in 1996 - she was equally renowned for her powerful dissenting opinions, from 2000’s Bush v. Gore recount to the Court’s July 2020 decision (based on the 2014 Hobby Lobby case) to strike down the Affordable Care Act’s contraception mandate on religious and moral grounds. Of the latter she wrote, “Today, for the first time, the Court casts totally aside countervailing rights and interests in its zeal to secure religious rights to the nth degree. This court leaves women workers to fend for themselves, to seek contraceptive coverage from sources other than their employer's insurer, and, absent another available source of funding, to pay for contraceptive services out of their own pockets.” Other noteworthy dissents energized liberal activists by calling out gender and race-based voting discrimination. Her dissent in Ledbetter v. Goodyear Tire & Rubber Co. (2007) eventually led Congress to pass the Lilly Ledbetter Fair Pay Restoration Act, which was the first bill signed by President Barack Obama upon taking office in January 2009. And in Shelby County v. Holder (2013), she decried the Court’s invalidation of a key provision in the 1965 Voting Rights Act, writing, “Race-based voting discrimination still exists. This court’s decision is like throwing away your umbrella in a rainstorm because you are not getting wet.”

But while her reputation as a legal scholar was hardly surprising, her late-career transformation into a pop cultural phenomenon was totally unexpected. What other Supreme Court Justice could inspire parents to dress their daughters up as her for Halloween? Or have their fitness workout videos go viral? And, other than Thurgood Marshall, how many other justices have not only had a critically acclaimed documentary (Julie Cohen and Betsy West’s Oscar-nominated RBG, 2018) but a Hollywood biopic (Mimi Leder’s On the Basis of Sex, also from 2018 and starring Felicity Jones as the young Ginsburg) dedicated to them, not to mention shout-outs in popular entertainments ranging from Saturday Night Live to The LEGO Movie 2?

While the 2013 launch of the Notorious R.B.G. Tumblr page made her an internet sensation, many trace the “cult of RBG” to the memes and merchandise that proliferated following Justice Ginsburg’s passionate dissenting opinion in the 2014 Hobby Lobby case. Her iconic status was only further strengthened by Donald J. Trump’s election in 2016 when, as Entertainment Weekly’s Tyler Aquilina observed, “As the oldest justice on the bench and the de facto leader of the Court's left-leaning faction, Ginsburg became a champion for liberals who dreaded Trump's potential to shape the future of the Court. She was no longer merely a judicial hero; she was a symbolic barrier against a decades-long conservative Supreme Court majority.”

Speaking at the Sundance premiere of RBG in 2018, Ginsburg said, “The more women who are out there doing things, the better off all of us will be for it.” She also cited Martin Luther King, Jr., adding, “The arc of the moral universe is long, but it bends towards justice.” But her favorite inspirational quote was by 19th century abolitionist Sarah Gremke, who said, “I ask no favor for my sex. All I ask of our brethren is that they take their feet off our necks.” RBG lived her life as a testament to all those beliefs and we are the better for it. Her passing creates a void not only in the Supreme Court, but in the hearts and minds of all of her devoted admirers.

Want To Learn More About RBG? Pratt Can Help!

If you’d like to learn more about Ruth Bader Ginsburg’s amazing life and career, Pratt has many great resources - from books and ebooks to movies and musicals - to choose from, as listed below.

Posted by Tom Warner, Almost Hip Guy at 8:39 AM No comments: