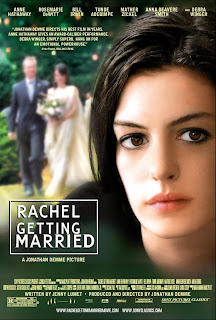 Jonathan Demme seems like a cool guy, but while he makes good movies, he's never made a more than one great feature film outside the domain of his obvious first love: music. His concert films - like the Talking Heads doc Stop Making Sense, Neil Young: Heart of Gold and Storefront Hitchcock - are remarkable, but other than Silence of the Lambs (and possibly the Oscar-nominated Philadelphia, which I've never seen), his narrative feature films never quite hit the mark for me. (Full disclosure: I've never seen The Agronomist, Demme's 2003 documentary about Haitian radio journalist and human rights activist Jean Dominique - which is supposed to be great.) Case in point: 1986's Something Wild, a cult-ish film which had a great soundtrack and started off as a wacky romantic comedy filled with interesting characters only to run out of steam (and ideas) the last hour as it reverted to being a predictable crime movie. It was like two different movies. The moment was lost somewhere.

That said, I rented Rachel Getting Married last night from my grocery's store's Red Box vending machine. It's good, the music's great (as usual), and props should have gone (and did) to star Anne Hathaway who, like Kristen Scott Thomas in I've Loved You So Long (a French arthouse import that was also, surprisingly, available for Red Box rental), is asked to stretch as an actress by playing an unlikeable character and - here's where the craft comes in - make audiences care about her. That takes some chops, and Hathaway has them. But right off the bat I thought her co-star, veteran TV actress Rosemarie DeWitt (Standoff, Mad Men, United States of Tara) - who plays Hathaway's sister, the titular "Rachel" who's getting married - was better and on the male side, Bill Irwin was terrific as the "Can't-we-all-just-get-along (at leat until the wedding's over)?" dad. Mather Zickel kind of annoyed me, though, not because he was bad, but because he just looks looks too damned much like a young George Clooney - and I find that distracting.

Speaking of distractions, that's what derails Rachel Getting Married from being more than just another "good" film about dysfunctional families with good ensemble acting. As a director, Demme is sometimes addled with attention deficit. The most obvious distraction is the whole music thing. Much was made about the musicians that appear in the film - TV On the Radio singer Tunde Adebimpe is remarkably good as the groom Sidney (though his best performance is in 2001's Jump Tomorrow), and others get cameos as friends (Fab 5 Freddy) or wedding musicians, including Robyn Hitchcock, Tareq Abboushi, Demme's son (playing "Here Comes the Bride" on electric guitar a la Hendrix playing "The Star-Spangled Banner"), and various other notables I shoud know but don't because I'm not that hip. The music's good, the musician cameos are cool, but so what? They don't add anything. They're a nice touch, but...distracting! (Demme also gives cameos to some of the 9th Ward folks he met while filming his 2007 New Orleans mini-series Right To Return: New Home Movies from the Lower 9th Ward.)

Likewise, Demme gets distracted with pacing - the wedding testimonials go on way too long, the 12-step meeting confessionals go on too long, the wedding party celebrations go on too long, the teary feel-good hugs across the aisle between the two ethnically diverse families - because he can't decide where to cut. And the result is, as with Something Wild, "the moment is lost." Same with the narrative. At the start ofthe movie, Ann Hathaway's Kym character goes to a 12-step meeting where she meets Mather Zickel. Later, hen she arrives at her family home, there's Mather Zickel who, it turns out, is the groom's Best Man. Cut to a basement scene where Hathaway and Zickel are shown fucking. But then, other than a few supportive lines from Zickel to others about "how hard it is for rehabbers to deal with family," that whole narative thread slips away. More lost moments.

OK, now to Hathaway. She's really good in this film, but 90% of her acting early on is chain-smoking (in a most "unglamorous" way!) and snarling...and the plot has her inevitably get behind the wheel of a car after a predictable contretemps with her aloof mater familias Debra Winger and even more predictable car crash (having in the past killed her brother after driving off a bridge while zonked out on drugs, it's the "relapse" crash we've been waiting for the whole movie)...but all that's been done before in every other rehab/relapse tearjerker on the Lifetime Channel. No, the scene that really got to me, and the scene that makes the movie and doesn't "lose the moment" comes after the crash. Hathaway returns home, cut and bruised like she's auditioning for lead zombie in Return of the Living Dead (as pictured below), and esilently nters her sisters's room. 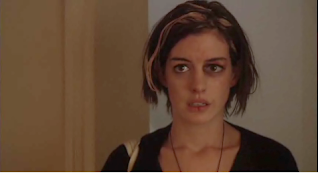 Anne Hathaway after a Goth makeover

DeWitt looks at her broken down little sister and neither sibling says anything. Cut to a silent, trembling Hathaway in a bathtub, being cleaned up and fixed by her sister. It's a poignant, touching moment, and no words or over-acting taint the moment. It looks and feels real. And it makes the film for me.
Posted by Tom Warner, Almost Hip Guy at 8:23 AM No comments: