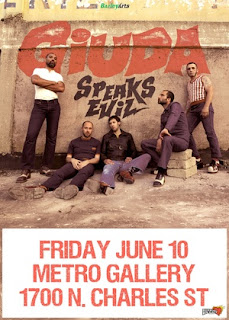 Giuda returned to Baltimore for their second ever show in Charm City (they played at Golden West Cafe in Hampden back in September 2012), in support of their latest album Speaks Evil (2015). It's another pitstop on their West Coast to East Coast 2016 stateside tour that started in Seattle in May and winds up in Chicago on June 17. 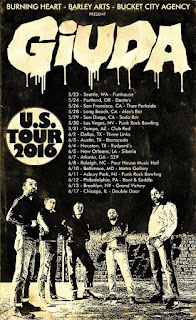 Since we missed them the first go-round, Amy and John Rouse and I took advantage of this rare opportunity to see the Roman rockers live (the proof is below!).

It was the last ever performance of Idle Gossip, the popular local Anglophile-Mod Revivalist band that has decided to pack it in after years of playing to enthusiastic crowds in the region. We had never seen them before, but they obviously adore '60s British Invasion bands and wear their Bluesy/R&B/Mod influences (Yardbirds, Small Faces, Who, Slade, Jam) on their Anglophile sleeves (quite literally - the singer was even wearing a Ben Sherman shirt and later changed into a red "Three Lions" England football jersey).

They played an energetic and emotional set, highlighted by fans presenting the singer with a farewell cake.


The opening band was DC's high-octane garage band Jake Starr & The Delicious Fullness, whose retro aesthetic included an actual go-go dancer in knee-high white boots and shimmy dress. These guys really have the Swinging Sixties vibe down pat in their fashion and graphic design sensibility - every flyer or record sleeve captures the essence of the '60s. Along with Baltimore's The Stents, they have the best graphic designs, hands down. They even have an EP called Modesty Blaze that uses the same font as the cult-kitsch movie Modesty Blaise. But the Swingin' '60s groove is abetted by lots of rootsy American Garage Rock. We liked them a lot!

And like The Ramones, a full Guida album flies by in about 30 minutes, so conceivably they could have played every tune they've ever recorded during their performance, but that would probably require a case of  energy drinks because these Roman gladiators give it their all and hold nothing in reserve.


Giuda opened with "Working Class Man" and closed with "Hey Hey" (though the chorus goes "Hey, hey, you get out of my way, cuz I don't wanna see you no more," we didn't take it personally!) If my memory serves me well (though it rarely does!), the rest of the set went something like, in no particular order, this:
Encores:
Though the set started Friday night, it was Saturday by the time the boys finished, so the two Saturday night songs were rather fitting. (I just wish they had also covered the Bay City Rollers' "Saturday Night"! But the Rollers were invoked, at least in spirit, in the form of the song "Tartan Pants.") 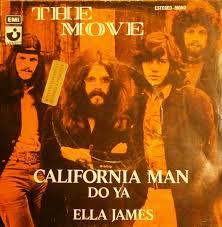 The only two songs we didn't recognize were "California Man," - a cover of the 1972 Move song (their last single release, which was later covered in 1978 by Cheap Trick), as shown performed by Guida at another show...

...and "Maybe It's All Over Now," which is the B-side of Giuda's vinyl-only "Wild Tiger Woman" 7"-inch single.


Giuda's encore set included a roaring cover of Elton John's "Saturday Night's Alright for Fighting," which led to an unsolicited stage invasion by some drunk narcissist (Chelsea Graveyard have a song for him - it's called "Rock and Roll Asshole") whose friends reveled in his rudeness...but Guida lead guitarist Michele was having none of it and quickly turned off his microphone, so that the Space Invader's would-be karoake rendition turned into a mime performance. (The late Cramps frontman Lux Interior had a ready solution for stage invaders - I once saw him bash an overenthisiastic fan in the head with his mic stand; no further intrusions occurred that night!)

As Guida left the stage, DJ El Suprimo cued up "Fat Boy Boogie" and we made sure to grab matching orange Giuda t-shirts at the concession table (we wear them together for the Tweedledee-Tweedledum Effect - or in my case, Tweedledumber!), passing up the excellent value $10 Metro Gallery "My Three Sons"-styled triple-lineup commerative tee (shown below). 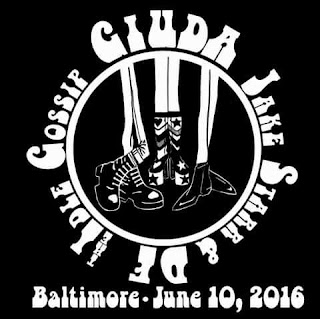 Afterwards I forced a camera-shy Amy to get her picture taken with Giuda, who were hanging out on the sidewalk outside the club on North Charles Street. I didn't exactly have pull John Rouse's elbow to get in the photo, which was taken by none other than Giuda guitarist Michele!


After talking about the resurgence of Giuda's favorite hometown team, 3rd-place Serie A finishers Roma (aka I Lupi, "The Wolves," whose legendary playmaker Francesco Totti inspired Giuda's song "Number 10") - who more importantly beat cross-town derby rivals Lazio twice this season - and the prospects for the national team (Gli Azzuri, "The Blues") in the upcoming Euro 2016 championships ("Not so good this team" they agreed), we headed home. And Giuda packed up to journey on to their next gig in Asbury Park, NJ where, no doubt they won't stop rockin' and will (as Lorenzo implores them in "Get That Goal") "make some noise"! Roll on, Guida, roll on!

Giuda (pronounced JEW-DA) are an Italian five-piece band from Rome, born from the ashes of one of the finest European punk rock groups, Taxi. They play the most exciting kind of retro-sounding rock’n’roll and junk shop glam. Their look of true working class heroes (boots, polos, chequered shirts, leather jackets and short or shaved hair) gained a touch of glam-kinda style over the years, better reflecting the rich patchwork of their music.

After their debut album Racey Roller in 2010 and Let’s Do It Again in 2013, now the band are back with their third album, Speaks Evil, first release on visionary label Burning Heart. Their mix of anthemic ‘70s glam hooks and the punchy delivery of early UK punk has grown up into something that is just rock’n’roll, straight and sharp as Giuda can be. First bite of the new album is “Roll The Balls”, single advancing the album release expected on NOVEMBER 20th, 2015, a stunning quintessential piece of straight rock’n’roll with hints of Brit glam rock, a tantalizing taste of Giuda at their best.

Racey Roller which was described by Robin Wills (The Barracudas) as “Cock Sparrer twinned with the Equals”, became an underground sensation and praised by publications as diverse as Mojo, Rolling Stone and Maximum Rock’n’Roll. Similar path for Let’s Do It Again, that Dick Porter of Vive Le Rock hailed as “an album that stomps along with a silk scarf knotted around its wrist”.

Speaks Evil is the third awaited chapter of GIUDA’s history, a new tile matching the typical style of the band, a stroke to the heart and a punch to the gutter in 10 brand new songs, catchy refrains craving their way into the mind and brave guitars on a solid rhythmic structure.

Recorded with analog equipment and strictly-70’s instruments by Danilo Silvestri, the record’s producer along with guitarist, Lorenzo Moretti, Speaks Evil continues on the musical path outlined by Racey Roller and Let’s Do It Again, while improving the song-writing process with more complex structures and catchier melodies, without losing any of the spontaneity and energy.

Although the band openly admit their influences, including early 70’s rock giants like Slade, The Sweet and T-Rex, semi-obscure junkshop glam acts like Hector and Jook, Vanda & Young’s pre-AC/DC Aussie rock and Slaughter And The Dogs and Eddie and The Hot Rods’ pub rock/punk, the Rome-based quintet have managed to create a truly original sound, making them one of the most happening bands on the international rock’n’roll scene.

“From Roma, neo-bovver rockers get stomping.  Recalling the stack-heeled sounds of Slade, The Sweet and The Faces plus the “junk shop glam”, Romans Giuda do their bit for similarly no pretention, high energy rocking with their debut, Racey Roller.”  Mojo

“They’ve ram-raided the vaults of 70′s glam, punk and rock ‘n’ roll to make a foot-stomping, fist pumping riot of sound that has the scenesters, the punks and rockers and young and old in attendance going nuts! Giuda are the best band we’ve seen in years!”  Vive Le Rock

“This is the perfect sound for life on the terraces, in the discos, at a gig, at the pub and in the streets, always with Giuda blasting in your ears”  Rolling Stone

Posted by Tom Warner, Almost Hip Guy at 8:24 AM No comments: