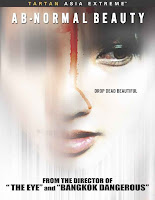 The Hong Kong-born, Bangkok-based Pang Brothers (Danny and Oxide) paint pretty pictures but can't tell a story worth shit. And there's the rub, for these guys have great eyes (no wonder The Eye and The Eye 2 were Western crossover hits) and great visual flair - they stock their well-composed, creatively edited frames with beautiful scenes and creatures (Angelica Lee was the only reason I sat through The Eye) - but ultimately are like music video directors that are creatively taxed when they attempt to stretch a narrative beyond the 5-minute length. A lot of talented directors have visual flair and style without being tied down to traditional narrative structure; Wong Kar-Wai and Godard come to mind - but these auteurs at least have something to say, some meaning beneath or behind their images. But the Pangs have nothing to say. All is flash without after image, form without substance. They strike me as being like great musicians that can't write a lyric to save their lives. A picture may be worth a thousand words, but every so often a picture-snapper should throw us a linquistic bone to chew on - even a monosyllabic one would suffice. Or as Twitch reviewer Todd so aptly summed it up: "Chock full of gorgeous – and disturbing – cinematography Oxide Pang’s Ab-Normal Beauty represents both the best and the worst of the Pang Brothers approach. Absolutely stunning to look at the film is a text book case of style over substance..."

That said, I watched Ab-Normal Beauty on the strength of its beauty, namely Race and Roseanne Wong, real-life sisters who make up the Hong Kong Cantopop duo 2R (aka The Twins), who are kinda like a Chinese Puffy Yumi Ami - minus the talent. (And yes, this means Hong Kong still makes "Race" records!) Though Race is the film's star, Roseanne Wong is pretty famous in her own right, having been romantically linked with Edison Chen - he of the Hong Kong sex scandal. But as far as the form vs. content formula goes, suffice it to say the 2R's fit form trumps the lame content of their acting. 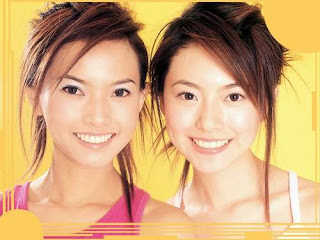 And what are The Twins asked to do in this extended music video? Here's the imdb plot summary: "Jiney [Jin] is a talented student of Arts with a trauma in her childhood and lack of communication with her mother, and excellent photographer that is not satisfied with her awarded works. When she witnesses a car crash, she is driven by a morbid wish and takes pictures of the dead victim. She becomes obsessed with death, and her close friend Jas feels that Jiney needs help with her abnormal behavior and attraction. When Jiney supersedes her death wish, she receives a snuff video where a girl is tortured and killed in front of the camera. Jiney shows the tape to Jas, who questions the authenticity of the footage, and they believe it is a prank of their friend Anson. When the girls realize that it is not a joke of Anson, Jiney receives another tape with the message inviting her to take a look. When she sees the tape, she becomes scared with the sinister footage."

Pffft, whatever! The snuff film plot twist is lifted straight out of the opening of Toshiharu Ikeda's Evil Dead Trap (Shiro no Wana, 1988) and the subsequent torture sequences are equal parts Hostel and Saw. But such narrative shortcomings aside, the Pangs know the Godard Kino Credo all too well: "all you need to make a movie is a girl and a gun". They've done the gun (Bangkok Dangerous, 1999) and have a long list of lovely ladies they've let the lens leer over (e.g., Oxide's fiancee Angelica Lee in The Eye and Re-Cycle, Qi Shu and Eugenia Yuan in The Eye 2), so they know what works as far as keeping this guy's attention. To sweeten the M Appeal even more, Oxide Pang has made the 2Rs play lesbian lovers. Ooooo, how Frat-boy appealing!

But my favorite part of the movie was the scene where Race as Jin buys a book of Joel-Peter Witkin death photos. Looking like an art school goth gal just discovering her mentor-muse, Race's eyes beam with a post-coital glow. It's actually a key scene, because, like Race's character Jin, Witkin claimed that his artistic vision - and subsequent death fixation - was shaped by a childhood incident where he witnessed a little girl being decapitated in a car accident. Jiney even holds the book up to wannabe-boyfriend Anson (pretty-boy blank presence Anson Leung) and exclaims, "Isn't that beautiful?" as she looks at this photo of two severed heads kissing: 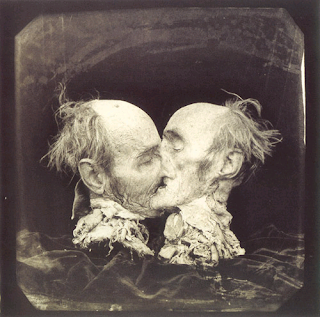 Uh, yeah - what you said! Of course, Anson agrees with her, because boys - following their hard-wired biological impulses - will say and do just about anything in the pursuit of booty.

While I enjoyed peering at Twins skin for over an hour and a half, I realised that the sexiest part of the body is the brain; once the Pangs figure that out and give us some characters with a depth beyond their undergarments, they'll be on to something. As Twitch reviewer Todd correctly noted, "The Pang Brothers are a pair of the most technically accomplished film makers in the world and while that focus on technique can sometimes overwhelm their characters they simply shoot gorgeous film. There are breathtaking shots scattered throughout the film, the composition is flawless and the film is edited with punch and style". True enough: Oxide Pang, who trained as a telecine colorist before moving to Bangkok, even won a technical award for his digital coloration of the Thai film Tears of the Black Tiger (Fah Talia Jone, 2000). But the Pangs have yet to make a film that has the character depth or narrative flair of Wisit Sasanatieng's masterpiece or Pen-Ek Ratanaruang's (Prabda Yoon-scripted) Last Life in the Universe (เรื่องรัก น้อยนิด มหาศาล or Ruang rak noi nid mahasan, 2003). Which is a reel shame because, until they do, they'll remain a sound and a fury that signifies nothing.
Posted by Tom Warner, Almost Hip Guy at 7:56 AM No comments: 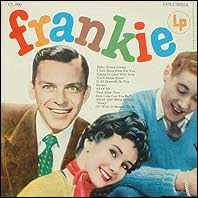 As an unabashed Sinatraphile that grew up in a household of Sinatra lovers (epecially my older brother Billy, whose massive Sinatra LP collection I either inherited, borrowed or stole), I have scores of albums, cassettes, CDs, 78s, and books related to "The Voice of the Century" (apologies in advance if I've somehow slighted William Hung). And yet my favorite Sinatra album, Frankie, remains out of print on CD. I had my dog-eared copy thanks to my Mom, who loved this now obscure "long player" that's actually a a 1955 12-inch reissue of the 1946 original. Though the cover features a beaming Fifies-era Frankie watching over two bright-eyed young lovers (the dark-haired babe is Debbie Reynolds!), the numbers date from Sinatra's Romantic Utopian Period at Columbia Records when the boys were away at war and the women at home pined for the skinny, pencil-necked 'n' bow-tied Hoboken kid crooning love ballads set to Axel Stordahl's lush orchestration. Many of these songs have been cherry-picked for inclusion on other compilations, most notably the four-disc The Voice: The Columbia Years 1943-1952. The 12-track album was even reissued in the UK in 1960 under the imaginative title Frank Sinatra (long since out-of-print, needless to say), but Frankie has gone the way of the Huguenots in France: vanished from the face of the earth. 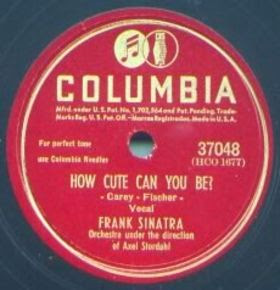 Yet my favorite tune from my favorite album remains ever elusive: "How Cute Can You Be". It was originally released as a single (b/w "Five Minutes More") in July 1946 and was Sinatra's first novelty tune for Columbia. Sure, it's out there for hardcore completists, but you have to either fork over $300 bucks to get the 12-disc Frank Sinatra - Columbia Years (1943-1952): The Complete Recordings (1993) or settle for the three-CD Romantic Sinatra from CD Universe. (Of course, I could just buy the MP3 online, but this virus-prone Web surfer is always wary of downloading stuff off the "Internets". Besides, I tried it twice and Internet Explorer crashed on me!)

Yup, I like this novelty ditty from the coveted Cutesy Canon of Frank's "Frankie Period" even more than the similar Bobby Troup number "Snootie Little Cutie" he sang with Tommy Dorsey and The Pied Pipers (btw, check out the fun video mash-up of Bobby singing this song on YouTube). It's fun, irreverent and has that great 1940s Damon Runyon-esque hepcat lingo that I adore. I still use phrases like, "He's a right guy" or "He's a stand-up kinda fellow" (linguistic staples of film noir dialogue) and such politically incorrect descriptors as "pert little skirt" and "kissy little missy". (No wonder so many people think I'm gay!) Frank even throws in a "Hubba!" at the end. Priceless.

"How Cute Can You Be" lyrics:

And here are the "Snootie Little Cutie" lyrics for kitschy-cutie linguistic comparison:

She's a classy little lassie
A keen little queen
And although sometimes she's sassy and mean
Just a fiend for romance is she
Squirly little girly, see,
She's a knockout, a beauty, snooty little cutie
Snooty little cutie, she.