Shine On, You Crazy Arthur

This is something I posted on Facebook on May 8, 2017. I'm re-posting it here in blog format, due to interest from friends, as well as to archive it on the internet.


(May 8, 2017) - Still reeling from news (via his brother Patrick on Facebook) of the passing of my friend Arthur Vincent Campbell IV, age 62, on April 20, 2017 in Summerville, South Carolina, after a long battle with cancer.

Arthur Campbell was the coolest - and strangest - guy I met during my time at Towson State University in the late 1970s. On a campus teeming with clearly defined black-and-white stereotypes (Normals, Hippies, Jarhead Jocks, Date-Raping Frat Boys, Freaks, Geeks, Joe College, Future Suburban Housemoms, Future Young Republicans, Soulless Business Majors, Artist Manques), Arthur was always foggy gray - though occasionally rays of candy-hued day-glo-bright primary colors burst through when he strapped on his electric guitar to play those weekend Electric Anachronism Parties at Ward Hall, where the Kool-Aid was both spiked and electrified. To paraphrase Buzzcocks guitarist Pete Shelley, if Arthur Campbell was a painting-by-numbers picture, you'd be hard-pressed to find the colors with which to fill him in.

I didn't even know his real name until my Senior year, as he was nominally referred to by a slew of nicknames - Crazy Arthur, Wallflower, Wall, Boomer, Boomer Z. Wallflower, Wally Gator - and seemed to talk in code, his conversation filled with parables, word games and obfuscations. This was in keeping with family tradition, as his brothers, Jimmy (aka "Astro Boy," who also attended Towson State) and Patrick (aka "Dr. Waste," whose topical ballad "I Wanna Die on a DC-10" was later covered by my college punk band, Thee Katatonix) were also characters in their own right. I sometimes hung out with Arthur and Jimmy when they visited the nearby Ridge Avenue Girls (Terri, Debbie and, er, I forget the other one's name), and later went to shoot rifles with Arthur and Doc Waste at the Campbell's ancestral home in White Hall, Maryland (where Arthur claimed his parent's names were Igor and Morticia!).

Arthur was a true enigma, a guy who answered the call of all the classical muses - he spoke Latin, wrote poetry, read philosophy, painted, played electric guitar (influenced in equal measures by Jerry Garcia, Jorma Kaukonen, Manual Goettsching and Captain Beefheart's Zoot Horn Rollo) - yet also lifted weights (he had bulging biceps), boxed and studied martial arts, rode a motorcycle, and owned and regularly practiced shooting a veritable arsenal of firearms (I'm pretty sure he had Samurai swords and machetes, too).

He lived in a low-rent house behind the Burger King in East Towson that he christened The Embassy of the Dripping Moon (from a Captain Beefheart line "The moon was a drip on a dark hood" on The Spotlight Kid) where he played crazy experimental electronic tapes he called "Insect Fear Music" and where he parked his bullet-strewn VW Bug (which he shot full of holes with his beloved Beretta 9mm to provide DIY air-conditioning in the summer). In short, he was an intellectual with biceps who could not only verbally undress you with his wit (in multiple languages, to boot), but could literally kick your ass, as well. His head may have been up an Ivory Tower, but his body was primed to do battle in the ring with the American Gladiators.

He dressed and acted "Columbine" before anyone knew what Columbine was. But it was always just to get a rise out of people. And those of us who hung out with him soon adopted a similar look - favoring long dark wool trenchcoats (we called them "Deathcoats") in summer, sunglasses, cordoroys (never jeans!), fingerless gloves, etc. Needless to say, he scared me when I first met him. But he was so fascinating, he drew me in, making me want to know more about him and his unique worldview. He called me Tailspin Tommy and was later delighted to update my sobriquet to my punk band moniker, Tommy Gunn.

Somehow we connected through a shared affinity for William Burroughs novels, Grateful Dead music (yes, I was a Deadhead back then), the Dadaist sensibilities of the Bonzo Dog Doo Dah Band (Sir Henry Rawlinson!), cynical German philosophers like Nietzsche and Schopenhauer, underground comics, Blatz Beer, and a mutual distrust of all collegiate institutions from the glee club to mixers to Fraternity Row. When I became Features Editor on the school paper, I used my bully pulpit to publish Arthur’s comics and writings. They always were controversial and raised the hackles of the “Straights” – to our mutual delight! He even named his regular series "Strait Comics" (they were anything but!).

Later, my older brother Billy went back to study English at Towson (Literature being his first love, after already getting  his Business degree at University of Baltimore so he could bring home the bacon) and met Arthur in some European Lit class. He was greatly amused by Arthur's wit and vitriol (e.g., "This is the most boring book in the history of Western Literature!") and to this day still talks about him and his teasing of a ditzy post-grad, "Miss Vicky."

I lost track of Arthur after college, but thanks to the Internet we reconnected years later, around the time his book SunBurn (2007) was published – the language and themes took me right back to the Arthur I knew in college. He called SunBurn (not to be confused with Laura Lippman's 2018 novel of the same name) "a beach book," explaining, "Too many people are reading the same old boring crap while sitting at the beach." In many ways, this "elastic biography" of protagonist Radical Pump Boy is Arthur's story, the fictionalized account of one man's fight against what Axis of Logic editor Les Blough calls the "psychic deprivations, sterilized cognitions and repressed imaginations" of western rationalism. But always with a knowing sense of humor and absurdity. It's a long, strange trip, but as Ken Kesey once said: you're either on the bus or not, and this is a magical mystery tour for those who choose the road less traveled. 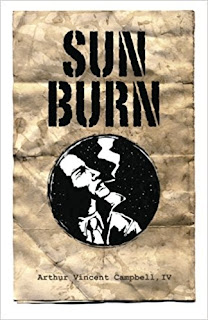 To this day, I still quote his words and phrases for things - "stupids" (his term for fellow students), "Insect fear music," "Mom's robots killed the poets," "Towson State You Adversity."

Later, he sent me a copy of a work-in-progress about his upbringing as a country boy in north Baltimore County (he was raised on Xanatl Farm, a beef and thoroughbred horse farm in White Hall, Maryland). For some reason, he valued my opinion – I was flattered, to say the least, as I always thought he was a genius, especially with the written and spoken word. In fact, he was the one person I could accurately call a “Renaissance Man.”

Henry James said he strove to be “one of the people on whom nothing is lost.” Arthur was one of those people, with an insatiable lust for life and knowledge. Nothing was lost on him. The loss is ours, and he will be missed by all who knew him.

Following is his Baltimore Sun obituary, as well as a link to another blog post I wrote about him.

Arthur V. Campbell IV, 62, of Summerville, SC, died April 20, 2017 after a long and valiant battle with cancer. Born in Baltimore, Arthur was the son of the late Arthur and Laura Campbell and was raised on Xanatl Farm, a beef and thoroughbred horse farm in White Hall, Maryland. Arthur graduated from Towson State University in the 1970's, where he studied many subjects before he received a BS in English. He continued his education at Dartmouth College and the Wharton School of Business. Arthur was a gifted artist. While in college, he enjoyed film making, drawing comic strips for the college newspaper, and playing guitar in bands. Arthur was a long time resident of Williamsport, PA. Arthur worked in many capacities there before being employed at the Lunaire Limited (now TPS), where he was responsible for engineering & design, marketing, and sales. Arthur taught at local area colleges. He loved teaching and sharing his knowledge with his students. He received the Pennsylvania College of Technology award for Part-time Teaching Excellence in 2006. Arthur restored his home in Williamsport to its Victorian roots where he often entertained his friends at black-tie dinner parties. During his time in Williamsport, Arthur wrote and published his first book "Sunburn". At the time of his death, he had completed the manuscript for his second book "Code of the Manor." Arthur and his wife, Megan (née Brown, of Williamsport, PA) moved to the Charleston area of South Carolina in August 2010. Arthur worked for Horizon Scientific, Inc. as Manager of Strategic Planning. In addition to his wife, Arthur is survived by a sister, Laura MacLaurin of Berryville VA; his brothers, James Campbell of Baltimore, MD and Patrick Campbell of White Hall, MD; and a nephew, Dr. David MacLaurin of Durango, CO.