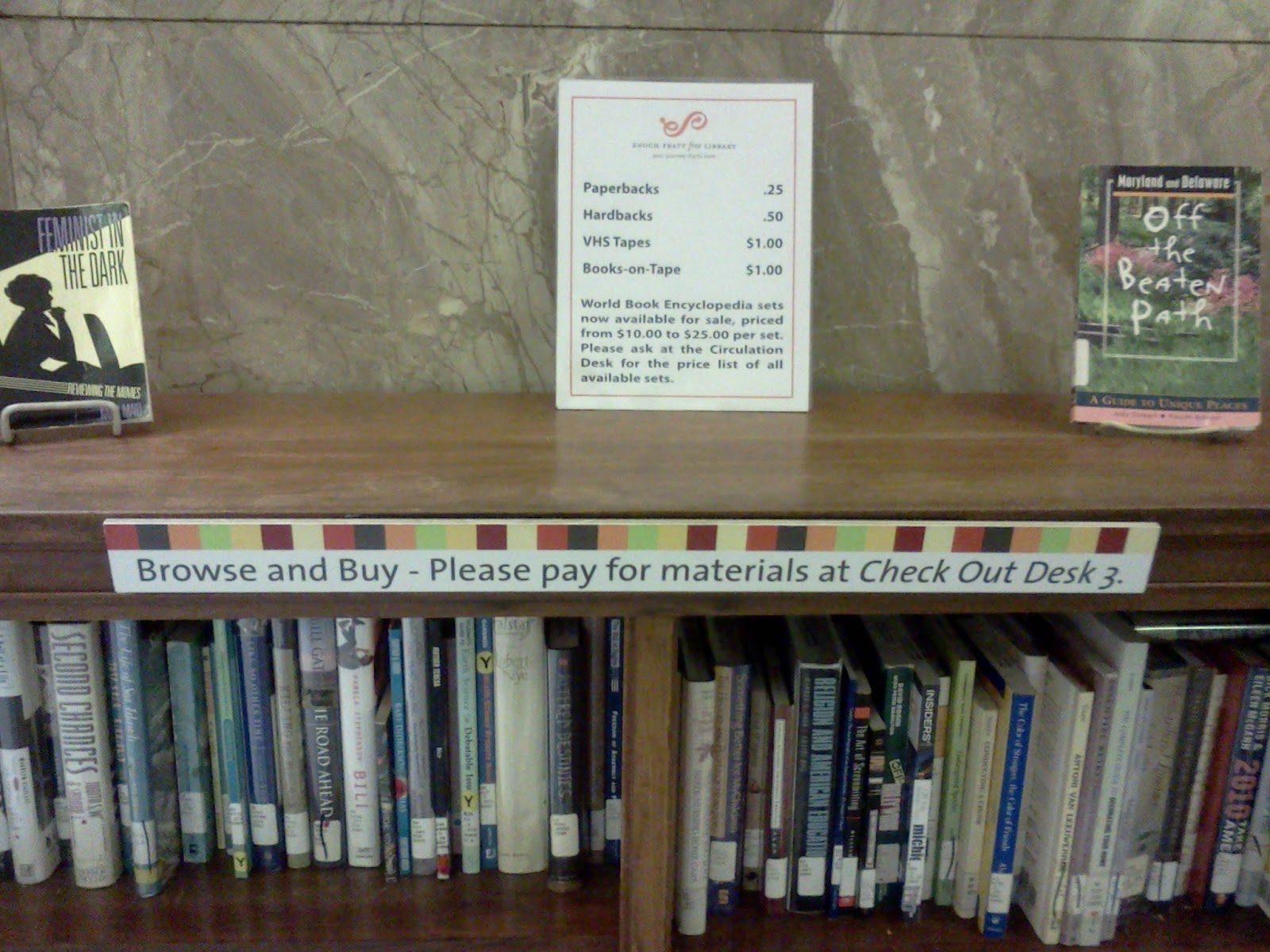 Give me your tired, your poor
Your discarded books yearning to breathe free
The wretched refuse of a teeming collection
Send these, the dog-eared and discolored to me
That I may plop my quarters on the checkout desk!

While “The Rack” at Nordstrom’s might be more famous, “The Rack at Pratt Central” has just as much value – at least to book lovers. Tucked away around the corner from the Computer Commons area in the Central Library’s main hall, it’s easy to miss this selection of discarded books (and some audio books-on-tape) that is split into Fiction and Non-Fiction shelves. But it’s well worth a look for the discerning bibliophile. I’m in the process of moving, so the last thing I need to do is add more books to the stacks of boxed books already in my living room. But as a book-loving hoarder, I simply can’t resist – especially at these prices (25 cents for paperbacks, 50 cents for hardbacks). Sure, there’s a lot of junk mixed in, but like the saying goes, ya gotta kiss a lotta frogs before ya find your prince. And where else for a total cost of a buck can one find such esoteric treasures as this recent Four Score:

Venus Envy:A History of Cosmetic Surgery by Elizabeth Haiken (Johns Hopkins Press, 1997, 370 pages). We live in fast-paced, high-tech times where change is constant – even with one’s own body. Be it face lifts, nose jobs, breast implants, liposuction, collagen injections or gender changes, surgical alteration is now an accepted part of American culture. I love this book because it dedicates whole chapters to “The Michael Jackson Factor,” “Beauty and the Breast,” and even my favorite Twilight Zone episode, the 1960 broadcast of “The Eye of the Beholder,” which addressed the difference between what society considers beautiful and repellent.

(Click here to watch the complete "Eye of the Beholder" episode on Hulu.)

The VillageVoice Anthology (1956-1980): 25 Years of Writing from the Village Voice, edited by Geoffrey Stokes, an out-of-print collection that contains Mark Jacobson’s fascinating “Paranoid Notes on the Strange Death of Bruce Lee” (Village Voice, December 4, 1978; also available in Jacobsen's own anthology Teenage Hipster in the Modern World). According to The Grand Masters’ Theory, Bruce Lee was murdered (killed by the “Iron Fist,” an ancient assassination technique known only to elder martial arts teachers) to stop the Third World Alliance he was forging through his films with “inferior, potentially mindlessly violent people” (e.g., Americans) who were not to be trusted with the ancient martial arts secrets revealed through his jeet june do style of kung-fu. Here’s an excerpt:


“To any student of paranoia…the Third World Alliance Theory had to seem tenable. After all, times were changing…It was every man for himself…Kung fu could be the ultimate weapon of these times, and Bruce Lee its Messiah. And before Lee was finished preaching in the drive-in and sleaze Temples of the Inner City, Western civilization could go down the tube in a flurry of sidekicks and nunchakas. Would the CIA allow a menace to exist? Obviously, something had to be done.”

I Just Want My Pants Back by David J. Rosen. This hilarious fiction paperback hooked me with its cover – yes, I judged a book by its cover! – and held my interest throughout because it documented a glib 20something world of bar-hopping, partying, texting and tweeting completely alien to mine (call it living vicariously). Narrator Jason Stride even perfectly captures the essence of  post-modern, post-irony hipsterdom in this passage: "They'd seen it all before, and even if they hadn't, they'd pretend they had...any sincere thoughts were immediately roughed up and taken advantage of...people laughed out loud a little less here, they were guarded. They didn't want to be surprised or something." Plus, the protoganist embarks on a Joseph Campbell-worthy Heroic Quest – to reclaim his Dickie slacks after a one-night stand with a stranger. The stuff of Great Lit!

Staying Dry: A Practical Guide to Bladder Control by Kathryn L. Burgio, Ph.D., K. Lynette Pearce, R.N., C.R.N.P., Angelo J. Lucco, M.D. Laugh at me all you want, but this is one of my most treasured finds.

Why? Because I carry it with me whenever I take the bus to guarantee that no one sits next to me – it’s a veritable “seat saver” when combined with frequent legs crossings and facial grimaces!