Titles: IN THE WOODS, THE SECRET PLACE, THE TREPASSER
Author: Tana French

I picked up the last two Tana French Dublin Murder Squad series books (THE SECRET PLACE #5 and THE TRESPASSER #6) at a used bookstore and the Rehoboth Beach Public Library, respectively. I was instantly hooked by the poetry of the writing, the author's eye for descriptive details, and the intelligence of the ever-twisty plots. But the real hook here was the depth of the characters (especially the women, to wit: Cassie Maddox and Antoinette Conway) and the skill with which French gives a revolving cast of narrators their changing point of view in the narratives. You get equal parts whodunit and psychological study. 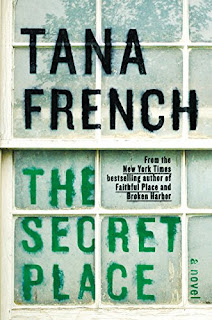 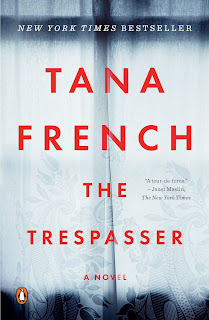 THE SECRET PLACE and THE TRESPASSER team feisty chip-on-her-shoulder Antoinette Conway with the more socially fluent Stephen Moran. THE SECRET PLACE is told from Moran's POV, as the young detective seizes an opportunity to join the Murder Squad by solving a case with the contrarian Conway. The plot involves a murder of a popular young Romeo at an Irish high school that points at the involvement of two rival cliques at a nearby girl's school. In THE TRESPASSER, the voices are reversed, with Antoinette narrating a story about the murder of a pretty young blonde that on its surface looks to be an open-and-shut case against a jilted boyfriend - but that is rife with office politics and potential corruption at the Murder Squad. I hope the next Murder Squad installment continues the adventures of Conway and Moran, though French likes to move on with her narrators, like a relay race runner passing the baton. 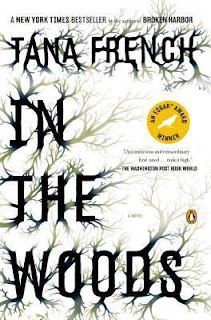 By the time I went back to read her debut, IN THE WOODS, I was rewarded with another guy-gal pair of detectives, but instead of the walking-on-glass tension of Conway and Moran's relationship, the team of Cassie Maddox and Rob Ryan are almost like a married couple. Both are thoroughly likable, though with mysterious backstories that will come back to haunt this narrative about a murdered child from a troubled family in a troubled town. By the time the case is resolved, more than just a child’s life is lost. The collateral damage is significant and will affect the Murder Squad in unforetold ways.

IN THE WOODS is told from the point of view of Rob Ryan, a man on a secret quest. Ryan lays it all out in the first chapter when he confesses, "What I am telling you, before you begin my story, is this - two things. I crave truth. And I lie." Beware, reader. All is not what it seems, nor is it headed where you think. But it's too late to turn back; as with all French's stories, you've already bought your ticket. As you buckle in for the adventure, get ready to enjoy the ride!
Posted by Tom Warner, Almost Hip Guy at 10:14 AM No comments: