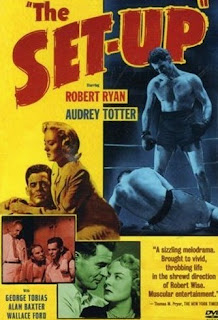 Caught this last night on Turner Classic Movies' "The Essentials" - featuring TCM host Robert Osburne and his new film buff sidekick, Alec Baldwin - and couldn't stop watching it, even though I have the DVD buried somewhere in one of my DVD towers-o-Babel. Like Hitchcock's Rope (1948) and Mike Figgis' Timecode (2000), it's one of those stories told in "real-time" narrative; that is, it's a 72-minute film recounting 72 minutes in the life of a lower-rung veteran boxer who's one punch away from some sort of resolution to his life of toil (which could be success, failure, retirement - or death). It plays out like a teleplay and its direction, editing, black-and-white cinematography, terse dialogue, and creative mis-en-scene are flawless.

My words can't do justice to just how great this Robert Wise film (his last for RKO) is, so I'll turn to one of my favorite film noir books, Nicholas Christopher's Somewhere in the Night: Film Noir & the American City: 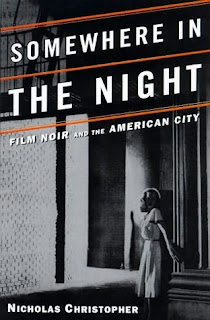 The Set-Up, directed by Robert Wise, is the only film noir I know of in which screenplay is adapted from a narrative poem (by James Moncure March). A surprising winner of the Critic's Prize at the Cannes Film Festival in 1949, the film is a curiosity for a number of reasons. For one thing, like Rope, it is set in real time. Seventy-two minutes long, The Set-Up chronicles seventy-two minutes in the life of an aging journeyman fighter, played brilliantly by Robert Ryan. Like other noir icons, including Robert Mitchum, Jack Palance, John Huston, and Tom Neal, Ryan in his youth had boxed professionally. The film is set as far from the fast lane as one could get, in a hellish town called Paradise City, which is depicted solely through its shabby rooming houses, greasy spoons, dark filthy streets, and most important, through the warrens of a rundown, sweltering arena. The Set-Up is entirely nocturnal, much of the composition black on black and brilliantly cut (Wise was Orson Welles' editor on Citizen Kane). The film is hands down bleakest boxing film ever made - certainly the harshest ever to come out of Hollywood. Even the criminals are seedy, small-bore types who play viciously for penny-ante stakes - no big-time promoters here, with diamond rings, cashmere coats, and limousines. And the crowds in every way exceed the coarse, vulgar stock players we find in other boxing films; here they are outright sadistic, with a blood-lust verging on hysteria. When the hero's left eye is swollen shut by punches in the climatic fight, a blind man in the crowd shouts to the other boxer, "The other eye, Nelson, close the other eye!"

Ryan plays a fighter who wants only to make enough money in his last fight to open a beer hall or cigar stand" that's about as far as his dreams carry. Very soon it becomes clear that that is much too far. His manager has sold him out, accepting a bribe and promising that his fighter will take a dive; furthermore, the manager has so little faith in his fighter that he doesn't even inform him of the arrangement! And it happens that the latter, having promised his wife this will be his last fight - and thus his last shot at that cigar stand - takes a terrible beating in the early rounds, but fights his heart out, rallies, and emerges victorious. He's very pleased with himself, a terrible weight lifted from his shoulders - but, cruelly, in this universe only a few minutes - until he realizes that the double-crossed crooks are waiting on him. They've sealed off every exit in the arena. Trapped, he's taken refuge in the ring, of all places, and there's a memorable shot of him from on high in which we see the enforcers sauntering down ever aisle, converging on him. Aerially, the arena appears in the form of an infernal mandala that has come alive, spinning in black space. The thugs give him a terrible beating, breaking both his hands in he end and tossing him into the gutter in front of a dance hall called "Dreamland," where his wife finds him. he can never box again, and its doubtful he'll ever put enough money together for that cigar stand. Maybe he ought to feel lucky that he's not dead; maybe not.

And that's it. There's no saga of rise and fall here - no parabola of any kind - as in Champion and Body and Soul. For this boxer, we see only the tail end of a downward spiral that began a dozen years earlier, when he set out as a club fighter and never broke into the ranks of the contenders, much less the challengers, for a championship. The Set-Up is less a morality tale than a nihilistic sprint that skirts the abyss. It is worth noting that in this film the fighter is in no way a kid from the slums who craves sharp clothes and a snazzy pad, but rather a low-key working stiff - he has the demeanor of a weary plumber or handyman - faithful to his wife in her drab dresses, uncomplaining, a clock-puncher who happens to labor, and be exploited, in a sweaty arena rather than a sweatshop.

Oh, I'd be remiss not to mention a cameo in the arena audience by future Dennis the Menace TV dad "Henry Mitchell," Herbert Anderson. Other cast highlights for me were seeing the great Audrey Totter playing a nice gal (she wasn't always a femme fatale!) and, Dwight Martin as the uncredited "Happy Glutton" who consumes hot dogs, hamburgers, ice cream, beer, and soda throughout the the climactic fight. And I wonder who the blood-lusting dame was who shouted out "Moider him!" in the fight crowd? What a sports fan! (In fact, The Set-Up's cast of "characters" is the kind of "lively" audience I tend to dread at my film screenings!)

Related Links:
Film Poetry: James Moncure March and the Roots of "The Set-Up"
Posted by Tom Warner, Almost Hip Guy at 9:30 AM 3 comments:

Haack: The King of Techno 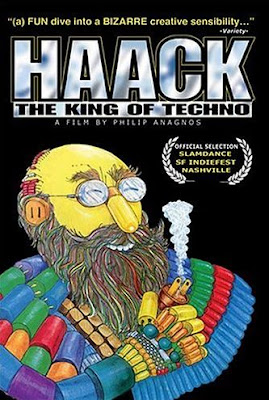 I only recently discovered electronic music pioneer Bruce Haack - thanks to a co-worker who alerted me to the fact that our library owned a number of his childrens albums in our "best-kept-secret" vault of phonograph records. Impressed by what I heard, I subsequently found a CD of his in a used record store (see my Hush Little Robot review), then found a used copy of an excellent 2005 tribute album to the man called Dimension Mix, that featured Beck, Stereolab, Fantastic Plastic Machine and others of that electronica ilk. I still know nothing about the man, other than he was Canadian who made electronic children's records (think Hap Palmer meets Kraftwerk), had a regretable name for a musician (a Haack musician?), invented/built/& played his own electronic musical instruments, and passed away in 1988. Oh, and he was apparently a product of his peace-love-and-Peyote-popping Hippy-in-the-'60s times, calling his friends "Starchildren" and confessing that while he didn't mind fame in the here-and-now, he was ultimately more interested in obtaining a "telepathic following." Tubular, baby!

But the missing link for me was finding a book or documentary something more in-depth than a mere Wikipedia entry. I found it - well, sort of - in the form of this so-so documentary by a director who admits he's not a documentary filmmaker. That said, this is, however, the only game in town as far as a visual record of electronic music pioneer Bruce Haack. Highlights are two TV appearances - on Gary Moore's What's My Line and Mr. Roger's Neighborhood - intersperced, unfortunately, with uninformative and unimpressive clips of no-name hipster musicians and DJs who smugly celebrate their discovery of Haack without any technical or historical insight beyond, "He was like, a genius man, I mean he was on Mr. Rogers." As they show off their aviator shades, tattoos, retro-psychedelic shirts, trendy facial hair-and-beard combos, and lava lamps, one never gets beyond the "I discovered Haack at at used record store" or "Friends turned me on to his tapes" insights. Only his fellow Juillard School of Music classmate, Ted "Praxiteles" Pandel, offers anything remotely analytical about Haack's music beyond its genius-making-kiddie-records Cool Factor, though the German group Mouse on Mars (Andi Toma and Jan St. Werner) come close to a serious discussion. But then Germans are always serious. After all, to folks from the land of Stockhausen and Kraftwerk, Haack is a kindred spirit whose machine-generated music is a logical progression of their beloved 20th Century electronic music.

The inarticulate hipster musicians interviewed irritated me beyond words; I wanted to rip their thrift store vintage clothing and pummel their meticulously-toussled-haired noggins with my fists, whilst shouting, "Shaddup and say something beyond how cool you are to know who Bruce Haack is!" And will someone tell Haack's friend/collaborator Chris Kachulis to put on a goddam shirt? The clip showing this 60-something, Boris Karloff-lookalike in a wife-beater undershirt shows off nothing but his simian-like hairy arms and shoulders and blotchy Leper Colony skin as he performs "Listen" in a subway station. (Chris, take a tip from Leonard Cohen - if you're pushing 70 and still performing, wear a nice shirt or suit!)

Though the film meanders on for another 10-13 minutes, it really has nothing more to say after 43 minutes (IMDB lists its official running time as 70 minutes, but my DVD was easily under an hour) - therafter sloppily and vaguely referring to the 2005 Dimension Mix tribute album that featured a few big-name electro-pop artists like Beck and Stereolab and Brother Cleve; unfortunately, none of those big names are interviewed, instead we get the guy who worked with the Beastie Boys (Money Mark?) and a bunch of no-namers. (And would it have hurt to do a title card with some info about the tribute album? How about a video insert of the album cover (even a draft copy)? The album came out in 2005 and this film was entered at the 2004 Sundance Film Festival, but, I mean, gimme something here to connect the dots for those of us who aren't in the know!)

Moreover, the film's greatest failing is that it never makes the case for its subtitle: "The King of Techno." It's just a glib catchphrase, like everything the hipster musicos utter.

One of the few extras on this DVD is a poorly-lit, poorly edited clip of the filmmaker speaking at a Sundance screening (did I see Skizz in the audience?), wherein he suggests that he wants to explore the full spectrum of Bruce Haack's amazing life in a narrative feature film with actors and such. Maybe he can pull off what a similar approach in Man in the Moon did for Andy Kaufman...but I doubt it.

Ultimately, this was a botched opportunity to say something about somebody who warranted the attention. I wish somebody like Skizz Cyzyk had made a documentary about Bruce Haack. He would have gotten beyond the surface and added some depth to this classic example of an "outsider musician" (Skizz's forte) rife for rediscovery by a new audience and rife for getting his due in music history beyond the Inner Circle of Hipster Cultdom. Still, it is all we have at the moment.