Bandland
400 block of Eutaw Street, between Franklin and Mulberry Streets. Across from Sgt. Pepper/Hanratty's and Gary Beauty Supply.

Tom Cohan recently brought back memories of jamming at Bandland, a dumpy warehouse a few blocks down from the Marble Bar run by a character named Mr. Walter Malloy (I can still remember his voicemail recording: "Welcome to Bandland, this is Walter Malloy. Leave a message at the beep and have a tremendous day!") that was a practice space for such bands as Zehn Archer and the all-girl She-Devils, among others. If memory serves me right, it was the old Stanley's Furniture building on Eutaw and Mulberry Street.


This would have been sometime around 1981, after Katie Katatonic and I were in Thee Katatonix and The Boatniks. (My "gap year" before I threw in the towel and moved on to Law and then Library School and my subsequent life of quiet desperation.) As the photo above attests, it was across the street from Sgt. Pepper (formerly Hanratty's), which was home to Jules' Loft (2nd floor) and Da Moronics (3rd floor). Jules' Loft would become a major hardcore performance space in the '80s.


Tom said he was inspired to expand his musical horizons after hearing me playing there with a bass player that was either Katie Katatonic, David Cawley or George Poscover. Hmmm, that's three bass players who all went to Towson High (and in the same class, I think - go figure!). Tom Cohan seems to think we played Joy Division/New Order's "Ceremony.


The recollection has become somewhat of a Rashomon phenomenon of differing perspectives, for my memory banks are depleted, while Katie insists she wasn't there (or if she was, she wasn't playing bass) and Tom Cohan may have conflated the gender of said bass player, perhaps assuming Katie was playing because of our legacy as the Katatonix and Boatniks rhythm section.


Tom Cohan: "I was early for band practice [with Richard Taylor and Zehn Archer]. I started walking up the stairs to our space at Bandland. I heard these wonderful sounds coming from a rehearsal room. I poked my head in. It was you [Tom Warner] and Katie and maybe someone else looking cooler than anything I had ever seen before. (Not Dave Cawley. I met him a bit later in another dumpy band rehearsal space on Saratoga singing songs about dinosaurs.) You were so friendly. You invited me to play with you. I started playing "Ceremony," as I was a huge Joy Division fan and that New Order single had just come out. You guys jumped in and it sounded amazing. It was truly a very influential moment for me."


I remember jamming there another time with the boy band wannabes Young Prufrock Alliance, featuring Dave Cawley (post-UXB and Nu-Beats but pre-Berserk) and Towson Public Library co-worker and prog guitarist extraordinaire Dan, who was totally into Rush and who said he would be embarrassed to play 3-chord songs in public with us. Dan didn't get "Punk," but he could read sheet music and fancied himself an intellectual like Geddy Lee (but we wished we could "turn" him because he sure could play guitar effortlessly!).


Dave Cawley and I later also played with George Poscover at Bandland, but George was entering his post-rock, all-classical music phase and the nascent promise of YPA was thankfully aborted.


Dave Cawley: "Yep.  Me and you and Dan made a tape and jackass Adolf [Kowalski of Thee Katatonix] threw it at a wall.  I guess we were out of college? It was about the time [Talking Heads'] REMAIN IN LIGHT came out... When we saw Byrne on Charles St. (You have to write that up on Facebook!  It's a good story!) I played bass with u and Dan and guitar with u and George. Fun times! Then just u and me played.  "Study Group" [A YPA original song celebrating good study habits]!   You were such a commercial sell out."


Prior to his change of heart, George was in an post-punk group called Non-Erotic Male Bonding, or N.E.M.B. Singer Lee Warren, guitarist Bill Carey and drummer David Bowman were formerly in a Florida band called The Stick Figures. When the drummer dropped out, Lee bought a Roland CR-78 drum machine, giving their slashing guitars and blunt beats an edgy, Cure-ious, Gang of Four vibe. N.E.M.B. released a lone single, "Torture" b/w "The Middle Room" (Green Records, 1981). 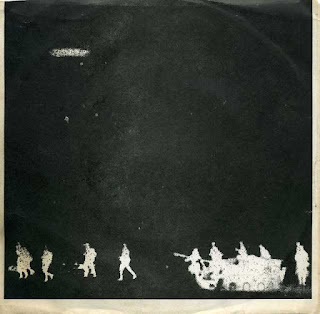 George lived with artist tENTATIVELY a cONVENIENCe (tENT for short) for a while and it was probably during this period that NEMB got involved with the "Gender-Fuck Party." As the Cheap Rewards Record Blog writes:

On Saturday April 4, 1981 a Gender-Fuck Party was held where attendees went into a closet where a Bolex film camera was setup with a cable release that advanced the film one frame at a time. On that night a version of NEMB that included Lee, George, and a guitar player named Charles Freeman performed.

Lee’s old band mates Bill and Dave took a hiatus from Stick Figures and came up to Baltimore in the summer of 1981. They joined Lee and George, who were working on some NEMB demos. The temporary line-up recorded two songs that would be released as NEMB’s sole output in a run of 500 copies. Their version of “The Middle Room” became the soundtrack to the Gender Fuck Party film that had previously been shown without an audio track. Lee and George can be seen in the film between :07 and :14.

Here's the film, as posted by tENT (aka BalTimOre, etc.):

If you look closely, I think you'll also see another Towson High grad, future model Genie Vincent, in this video, around the 1:39-1:44 mark. (Genie went on the be the model on the back cover of Malcolm McLaren's 1984 record Fans.)

George eventually gave up pop music, went to pharmacy school, then became a physical therapist (my PT, in fact!) and bicycling enthusiast. He has treated my various tennis and running injuries over the years. At one point, my sister Nancy worked with George at his Timonium PT office. Small world, eh?

Dave Cawley went on to achieve fame and a Go-Kart record contract with local pop-punk favorites Berserk. Though he still sings the praises of dinosaurs, Berserk became cult heroes thanks to their tunes about "Giant Robots" and Japanese superheroes like Ultraman and Kamen Rider. Today he plays (along with his Berserk bandmate Skizz Cyzyk) in the garage-surfpop quartet Garage Sale.


Tom Cohan, of course, went on to branch out from Zehn Archer's Rolling Stones-indebted '60s R&B to pursue broadened musical horizons, with Square One, Big As A House and currently Go Dog Go, among other indie-minded ensembles.

Hmmm, I wonder what would have happened if Tom Cohan, Tom Warner and George Poscover/Dave Cawley had formed a band? The mind boggles - though I'm sure we still wouldn't have been able to quit our day jobs!

Posted by Tom Warner, Almost Hip Guy at 10:33 AM No comments: