Della & The Detectives - "Drake on the Move" 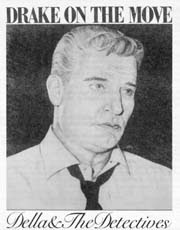 White hair, checkered coat, bulge on his cigarette pack
Shadowing the shadows at the corner of the depot
And chasing through the railroad track
Cut out, put your butt out, music up and dissolve
Drake on the move...

This past weekend, I busied myself getting a bunch of my vinyl records digitized so I could make some mix CDs. One of them was this 7-inch B-side written by P. O'Leary and credited to Della and the Detectives about Perry Mason's right-hand man, Paul Drake (played by Hedda "the Hat" Hopper's son William Hopper in the television series based on Erle Stanley Gardner's mystery novels) - the rakish P.I. with the silver hair and pinky ring who always checks and rechecks "every possible lead, every possible angle, and every possible possibility" for Perry so he can once again humiliate Hamilton Burger (TV Land's losingest district attorney) in court. (The Dave Nuttycombe-penned A-side "Donald Dearest" is a tabloid confessional spoof in which a bitter Huey Duck accuses his uncle of abuse.)

As the Eccentric Roadside blog raved, "Paul Drake is REALLY cool. A big, barrel-chested P.I. with prematurely silver hair in a checkered sportcoat smoking a Winston and driving a T-Bird. He's got his own private back entrance to Perry's office, always sits on the edge of Perry's desk and greets Della with an ever so suave "Hiya, beautiful" (she usually just rolls her eyes back at him)." And (like Warron Zevon's pina colada-drinking werewolf of London), his hair was perfect.

Yet, as the folks at the Thrilling Detective web site lament, despite being "one of the most enduring hardboiled private eyes of all time...he has never been the lead, always playing second fiddle to his famous client." Della and her Detectives try to right that slight, and it's the only musical homage I've ever heard to the legendary head of the Drake Detective Agency.

"Drake on the Move" was a Dr. Demento favorite, though "Della and the Detectives" was actually the work of Washington, D.C.'s Travesty, Ltd comedy ensemble. If my memory serves me well (it usually doesn't), I believe this 7-inch single came inside Travesty, Ltd.'s Teen Comedy Party LP (Used Records, 1983), which featured the final performance of the Starland Vocal Band (famous for 1976's #1 one-hit wonder "Afternoon Delight"). 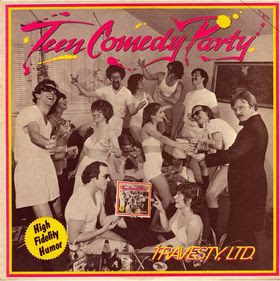 Out-of-print copies of the original '80s album sell for as much as $45 on the Internet, though in 2000 Travesty, Ltd. released an updated, 40-track CD version of it. One of the skits from this album, "Rock and Roll Doctor," ended up on two Dr. Demento albums and the box set The Greatest Novelty Recordings of All Time.

I think I got my album courtesy of Dave Nuttycombe back in the days when I reviewed music for various publications. The Wheaton, MD-based Nuttycombe was a Travesty alumnus (he wrote "Rock and Roll Doctor," for which the Travesty boys still receive royalty checks from Rhino Records), as well as a Langley Punks/Travesty Films alum (P.G. County's legendary screwball guerilla filmmakers who screened a retrospective of their works at the AFI Silver Theatre as recently as last June 2011 - not to mention previous screenings on Count Gore De Vol's Creature Feature television show - see "Gore Meets the Langley Punks"), Washington City Paper webmeister, and curator of the award-winning ("Best Humor Award," Washington Post) cassette tape Cheap Stories, which featured the best parts of the worst "adult" novels of the '40s, '50s and '60s, read to the accompaniment of "smokey bongo jazz" and the tenor sax stylings of Ron Holloway (veteran sideman with Dizzy Gillespie, Root Boy Slim, Susan Tedeshi, among others). 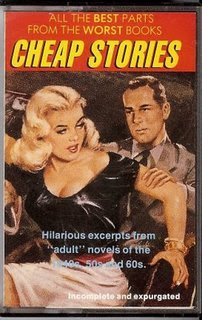 Speaking of Ron Holloway, his sax is put to great use on "Drake On the Move," as his wild solo riffing at the end plays a clever variation on the Perry Mason theme song. There is no information about any other musicians appearing on "Drake On the Move"; the Teen Comedy Party album credits Jane Raftery, Laura First and Mary Forbes as The Travesty Singers, so I wonder if they were also the voices behind Della and the Detectives (or was it the gals from Starland Vocal Band? Anybody know?)

I also wonder if the writing credit for "P. O'Leary" is a typo for B. O'Leary, as Bill O'Leary was one of the Travesty, Ltd. comedy ensemble.

Watch & listen to "Drake on the Move."


Paul Drake Lives!
According to the Travesty-Brand Fine Products web store, you can still buy this 7-inch vinyl single (as well as other products) by sending a check or money order in the amount of $5.00 + $2.50 payable to: West Production Services, Inc., P.O. Box 2810, Merrifield, VA 22116. 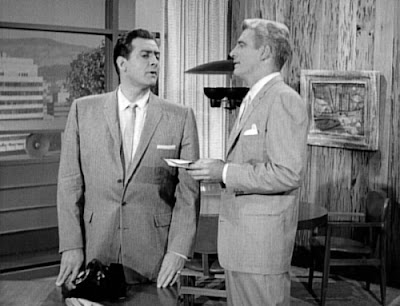 The Langley Punks/Travesty crew (Pat Carroll, Jim Phalen, Bob Young, Larry Zabel, Bill O'Leary, Tom Welsh, Rich West, Don Hogan, and Dave Nuttycombe) clearly knew their classic cult television history, and not just Perry Mason. Back in 1984, they made a cable TV pilot for The Travesty Show, a period throwback to The Honeymooners replete with gag commercials and black-and-white kinescope video look. DC's Wanktones (a Slickee Boys rockabilly side project) even made an appearance on the show, as shown in the YouTube clip below: 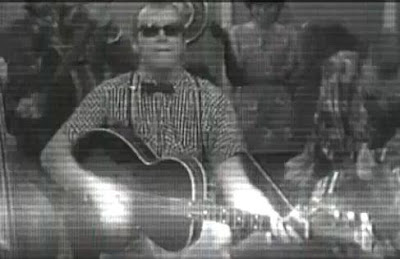 Mark Noone of The Wanktones on "The Travesty Show"

Watch The Wanktones on "The Travesty Show."


Root Boy Slim and Ron Holloway also made cameos on The Travesty Show, as shown in the video clip below: 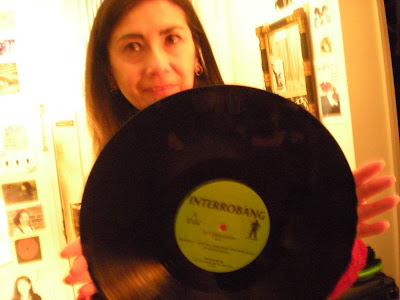 "Who's selling all their Mark Harp records???"

On Saturday, Amy Linthicum once again scored another vinyl record by her ex-husband, the sorely missed guitar legend and all-around musical genius Mark "Harpo" Harp (born Mark Linthicum, 1957-2004), when she found this mint condition, sealed 12-inch single in the local music bin of Normal's Books & Music in Waverly. "Who's selling all their Mark Harp stuff?," Amy wondered out loud.

She well remembered this record, dating from Harp's Interrobang days in the late '80s when, like many others in that synth-friendly era, he put down his guitar and started playing with various electronic toys and gizmos. 12-inch extended play Electro Pop dance records were the lingua franca of the decade, and Harp was an early fan and subsequent master of the medium, which emphasized big beats and repetition of simple lyrics, often mixed with sampled soundbites; in many ways they were the precursor to today's even more extended and sophisticated digital mash-ups.

"Interrobang" was the moniker Harp gave his collaborations with Mike DeJong when the two were messing around in his living room learning about sampling and beatboxes. Released as a (size matters!) 12" in 1989 on the (size matters!) Big Man label, the A-side "Sex Obsession" was named "Best Local Single" by the Baltimore City Paper "and got some airplay somewhere." 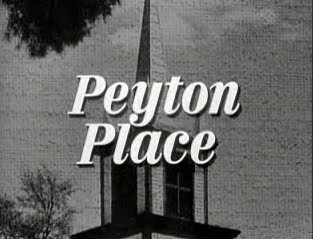 Not only size but length matters on the 12" A-side, which goes on for 8 plus minutes as the boys sample heavy from what Amy recalls was the 1960s TV series Peyton Place (the classic ABC melodrama that, inspired by the Brit soap Coronation Street, ran from 1964-1969 and launched the careers of Ryan O'Neal and Mia Farrow, among others). That would explain the references to "Mike" (Dr. Michael Ross, played by Ed Nelson) - "Is that you Mike?" "Oh, it's you Mike!" - and the obsession with, well, sex. Like the 1956 book and 1957 film of Peyton Place, the television series was considered sex-obsessed for its times, though the more controversial issues in the novel, such as incest, gave way to less scandalous plots like, oh, teen pregnancy.

"Sex? Yes! Mike? No!...Sex? No Mike - it's impossible!" - I'm sure Harp enjoyed this little injoke with Mike DeJong, who when not sampling sounds played keyboards and sax in too many Harp bands to remember. The song ends with the musicians' laughter drowning out the PP samples "Do you love me? That's impossible!" and "Sex? That's ridiculous!"

On the web site 24 Hours w/Mark Harp, Harp himself described the B-side "We Have the House Surrounded" as "Me and Mike DeJong in the living room learning about samplers and stuff." It starts off with a voice announcing "This is high fidelity," a sample taken off one of the many stereo demonstration records he collected. It then starts sounding like a bass-heavy Art of Noise big beat percussion workout, with Harp intoning "We have the house surrounded/Come out with your hands up" in what Amy characterizes as his charmingly thick "Bawlmer accent." Thematically, "We Have the House Surrounded" seems of a piece with another Harp law enforcement song, 1991's rap-parody "Cop Killer" - the latter one of the rare ditties featuring his then-wife Amy on sampled vocals (she alternates between letting loose blood-curdling screams and querying "Really?").