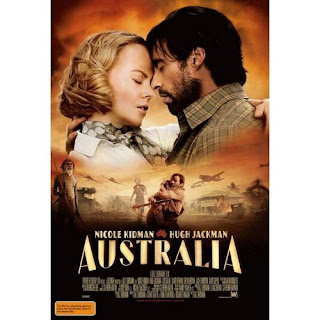 On the strength of my film friend Marc's zealous recommendation, I caught the saturday matinee screening of Baz Luhrman's epic Western-cum-War movie Australia. And while it was entertaining and engaging in a Hallmark Presentation/Willing-Suspension-of-Disbelief way, I really can't argue with the Rotten Tomato Meter consensus: "Built on lavish vistas and impeccable production, Australia is unfortunately burdened with thinly drawn characters and a lack of originality." And, I'd add, one of the worst-ever Elton John songs playing over the end credits (the Phil Collins Disney-soundtrack worthy "The Drover"). This is a Disney movie, plain and simple. Luhrman's Australia 101 movie has Hugh Jackman, David Gulpilil and newcomer child star Brandon Walters going for it, and it was enough of a tearjerker that my girlfriend soaked my arm with her excess saline production, but still, there was never any doubt about Hugh Jackman and Nicole Kidman falling in love, twarting robber baron King Carney (Bryan Brown), and saving the aboriginal half-caste kid Nullah to boot. Good prevails over evil. No surprises there.

Still, seeing yet another film dealing with Australia's execrable civil rights history inspired me to check out some better films from the Land of Oz, namely Philip Noyce's Rabbit-Proof Fence (2002, ***) and Nicolas Roeg's 1971 cult masterpiece Walkabout (*****). (Yes, full disclosure be damned - I had never seen them before!) Incidentally, a common thread runs through all these films: David Gulpilil - because you can't have an Ozzie film about Aborgines without the first Aborgine actor to star in a feature film, the iconic Original G.
Posted by Tom Warner, Almost Hip Guy at 11:00 AM No comments: