Everybody Is Stupid Except For Me

and Other Astute Observations 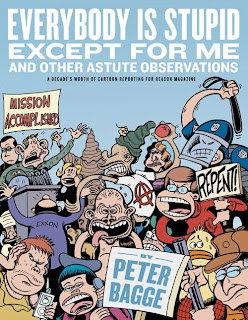 Everybody Is Stupid Except for Me and Other Astute Observations
A Decade's Worth of Cartoon Reporting for Reason Magazine
by Peter Bagge
112 pages, Fantagraphic Books (2009)
peterbagge@earthlink.net

I've loved Peter Bagge ever since I started reading his Buddy Bradley and Hate comics back in the Nineties when Seattle's hipster grunge scene was reigning supreme. Post-Hate, Bagge dropped below the radar for a while, had kids, and became a libertarian ("the other 'L' word" in his words). But regardless of his politics or life situation, Bagge has always maintained a critical eye for pretentiousness and pomposity - whether it be from the left or the right - as this collection of comic rants from his Noughties stint at Reason magazine ("the magazine of free minds and free markets") makes clear.

The book is organzied into thematic chapters of comtemporary American stupidity - Stupid Sex, Stupid War, Stupid Business, Stupid Arts, Stupid Politics, Stupid Tragedy, Stupid Boondoggles - culminating in "Our Stupid America." Bagge is even-handed enough to follow-up a dig at war protesters (with whom he sympathizes in idealogy if not execution) with an even harsher lambasting of pro-war zealots, and he even takes his libertarian chums to task - including his beloved Ron Paul ("In Search of the Perfect Human Being") - but what struck me most was his take-down of modern art and artists in "'Real' 'Art'" (Reason magazine, August/September 2004). They already made a movie out of Daniel Clowes' lampooning strip "Art School Confidential" but had Terry Zwigoff elected to make a documentary instead of a narrative film, he might well have used Bagge's cruel observations as source material. Brilliant stuff. I'm sure the old school folks at Baltimore's Schuler School of Fine Arts would be proud! 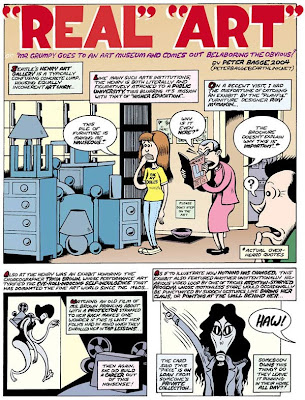 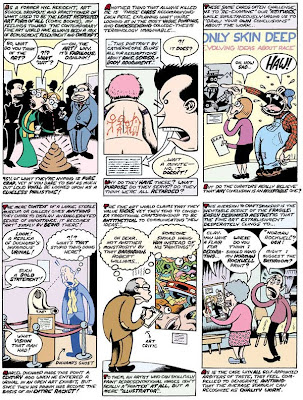 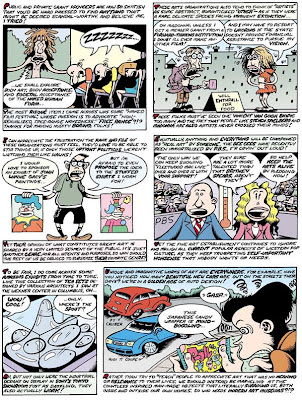 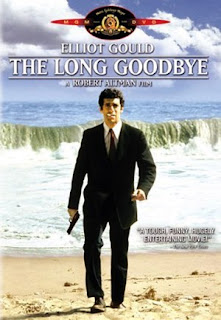 It's Fall, my favorite season and the time of year when I revisit the things I love most...like Raymond Chandler's Philip Marlowe novels. Spying a new edition of Chandler's best, most mature work The Long Goodbye (1953) at Daedalus Books & Music, I quickly devoured it. It was one of the few Marlowe novels that wasn't pieced together from short stories Chandler had previously published in pulp magazines (a cherry-picking technique he called "cannibalizing" his own narratives). 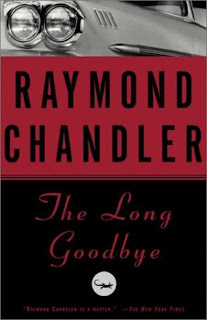 The following week at Daedalus, I saw the DVD reissue of Robert Altman's 1973 adaptation of The Long Goodbye, starring Elliott Gould at the height of his anti-Establishment, anti-hero popularity (Little Murders, Getting Straight, Bob & Carol & Ted & Alice, M*A*S*H), and picked it up, remembering only that I liked it when I saw it some 20 years ago. It's a command performance, Elliott's favorite in fact, but with Chandler's rich prose still fresh in my mind from reading The Long Goodbye, I was somewhat irked at the liberties taken with the source material.

Then I realized that Altman, like Chandler, was always someone more interested in style - and especially language and characterization - over narrative. For his part, Chandler even admitted as much when, during the filming of The Big Sleep (1946), a confused Howard Hawks (besieged by his head-scratching script-writers William Faulkner and Leigh Brackett) contacted Chandler to ask who exactly killed whom and the author famously replied that he himself wasn't sure! Likewise, Altman was only attracted to the script of The Long Goodbye when he was given the assurance that he could cast Elliott Gould as Marlowe and that he could tack on his own, anti-hero ending. So, purists beware, if you want adherence to Chandler's novels and dialogue, watch Bogie in Hawks' The Big Sleep or Dick Powell in Edward Dmytryk's Murder, My Sweet (1944). (Interestingly enough, The Long Goodbye and Hawks' The Big Sleep shared the same scriptwriter, Leigh Brackett - though she passed away before Altman's film was released in 1973).

And Altman, who wasn't interested at all in faithful adaptations of someone's else's work, was more interested in the idea of what it would be like for an Old School '30s and '40s-era hard-boiled romantic like Philip Marlowe (for that's what Chandler considered him and Marlowe even describes himself in The Long Goodbye as "a romantic...I hear voices crying in the night and I go see what's the matter") to be placed into the middle of the sexually liberated, New Agey hippie landscape of 1970s Southern California. In fact, "Rip Van Marlowe" was his working title for The Long Goodbye. And he gave Gould, like all the actors he worked with in his career, free reign as far as improvisation. "I make them do the work...do what they're trained to do, to act," he said.

So after Elliott Gould has been finger-printed at the police station and wipes the ink all over his face while doing a blackface impression of Al Jolsen, it's a total ad-lib. Gould's Marlowe is an update for sure, but his sarcasm and attitude are firmly in the Marlowe tradition of the '30s and '40s. But even in his day, Chandler considered his P.I. a throwback, a "man out of time" who is out of synch with the values surrounding him - or in Chandler's words, "this strange and corrupt world we live in." "Nobody understands me," Marlowe tells Mrs. Loring in The Long Goodbye. "I'm enigmatic." Another character in the novel, the Latino thug Mendy Mendez, seems to sense this too when he refers to Marlowe as "Tarzan on a big red scooter" - that is, someone out of his element, stubbornly clinging to his archaic vine (and values) in a mechanized modern age.

And the rest of the casting is inspired as well, with Nina Van Pallandt as the blue-eyed ice-princess wife Eileen Wade, Sterling Hayden as madcap alcoholic writer Roger Wade (a second, but excellent, choice following the death of Altman's good friend Dan Blocker), the menacingly meek Henry Gibson as the quack Dr. Verringer, and former Major League Baseball pitcher (and Ball Four bad boy author) Jim Bouton (great '70s Jiffy-Pop bouffant!) as Terry Lennox. But Altman's most brilliant casting coup was signing Mark Rydell to portray the loony sociopathic Jewish mobster Marty Augustine (this character was a complete Altman-Brackett invention, standing in for and expanding the novel's Hispanic gangster Mendy Mendez). I love Rydell's first encounter with Gould when he tells him he "should be keeping shabbos" instead of wasting his time with a schmuck like him. And, of course, the scene in which he and his thugs take their clothes off - while attempting to force Marlowe to - so that no one has anything to hide behind in their interrogation (a scene also featuring a non-speaking but pectoral-flexing, cameo by Arnold Schwarzenegger as a bodyguard!). I wonder if Gould's quip in this scene - after Rydell says he used to be self-conscious about taking his clothes off because he didn't get his first pubic hair until 15 - about how Marty must have felt like one of the Three Little Pigs, was also an ad-lib. Hilarious scene and vintage Altman. 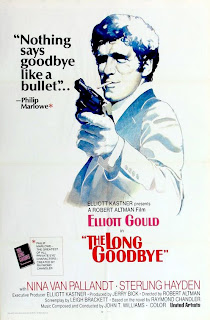 And speaking of traditions, the Hollywood studios have a long one of mis-marketing their releases. The Long Goodbye was no different. When the film opened in Los Angeles and Chicago, the original poster for the film showed Gould holding a gun and looking like a classic Bogart-era gumshoe with the tagline "Nothing says goodbye like a bullet." It was an anachronistic pitch to a genre (and audience) that just wasn't happening in the post-Easy Rider 1970s American cinema.

Another poster showed Gould with a cat on his shoulder and cat food in his hand, a gun sticking out of his pants and a ciggie stub sticking out of his mouth, and Nina Van Pallandt walking her dog in a doorway. The tagline was "I have two friends in the world. One is a cat. The other one is a murderer." This tough guy neo-noir pitch tanked with audiences as well. 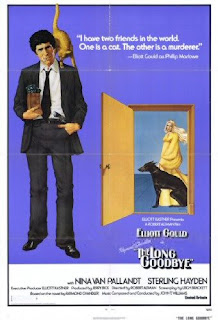 Altman complained about the posters and the producers came up with the idea of getting Mad magazine's legendary cartoonist Jack Davis to come up with a hipper poster. One that reflected the irreverent, sarcastic "no heroes" spirit that Elliott has mastered in th early '70s. The result, shown below, was used for the film's New York release where, suddenly, the film "killed," in Altman's words. 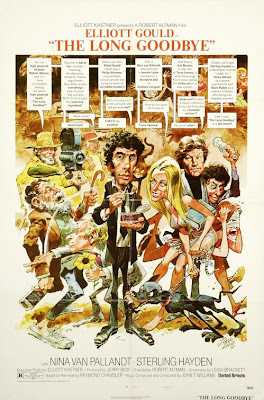 "We did great box office but by then it was too late." And so The Long Goodbye missed out on being a commercial success but gained its long-running status as a cult film in the process. Thank you, Jack Davis!
Posted by Tom Warner, Almost Hip Guy at 7:17 AM No comments: