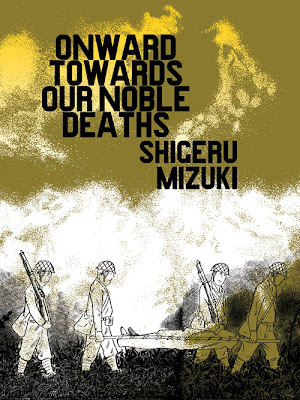 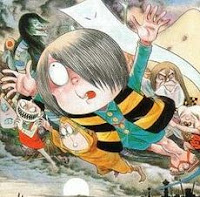 I just finished reading Shigeru Mizuki's graphic novel - his first manga translated into English! - about his traumatic experience (he lost his left arm and most of his friends) as a Japanese soldier in the South Pacific during WWII, Onward Towards Our Noble Death (Soin gyokusai seyo!, originally published in Japan in 1973 and reissued in April of this year by Drawn & Quarterly). Though Mizuki is best known for his yokai (ghost) horror manga subjects (especially those involving one-eyed boy Kitaro of the Graveyard, or GeGeGe no Kitaro, pictured at right), it was this fictionalized memoir of his 1943-1944 tour of duty at Rabual on the island of New Britain (now Papua New Guinea) that serves as one of the best anti-war testaments of all time. Though fictionalized, it is a 90% factual gunki-monogatari (war-tale); Mizuki only took the liberty, for dramatic impact, of having all soldiers in his graphic novel perish, when in fact 80 survived. 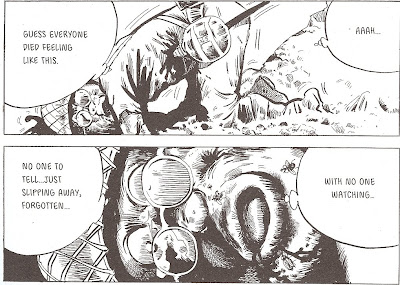 Mizuki's style is characterized by "cartoony" characters (and I have to admit, even though he lists his cast of characters at the beginning of the book, I had trouble telling them apart!) set against realistically detailed background drawings, an example of which is shown below. 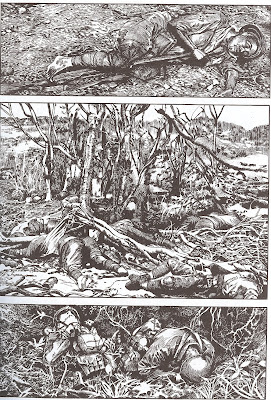 Scenes like those above remind me of another anti-war graphic novel, one from the other side of the world: Jacques Tardi's chronicle of pointless slaughter in WWI, It Was the War of the Trenches (C'etait la guerre des trenchees, Fantagraphic Books, 2010). Tardi also realized the absurdity of sending "cannon fodder" soldiers to their deaths in pointless charges out of the fetid, rat-infested trenches of France during the Great War, a conflict in which retreating soldiers were shot as traitors for not willingly falling on their swords - an M.O. echoed over 20 years later by Japanese brass in the jungles of the South Pacific. Stanley Kubrick masterfully captured the French military's absurd notions of "honor on the battlefield" in his early masterpiece Paths of Glory. A "trenchant" Tardi panel is shown below: 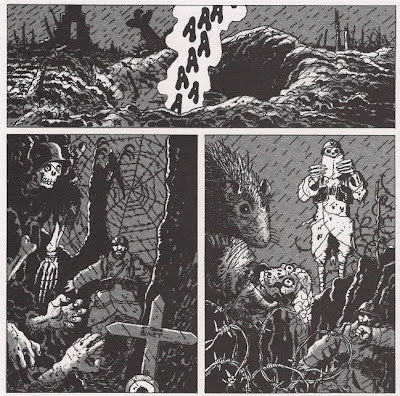 Publishers Weekly's review of Mizuki's book noted, "Onward joins the growing library of gekiga published by Drawn and Quarterly. Gekiga, roughly translated as “dramatic pictures,” is a manga genre that often focuses on the serious and tragic nature of life and can be compared to American indie or alternative comics. Mizuki is the fourth creator of the group of mangaka credited with creating gekiga in the late 1950s, a group that also includes gekiga pioneers Yoshihiro Tatsumi, Seiichi Hayashi, and Susumu Katsumata." 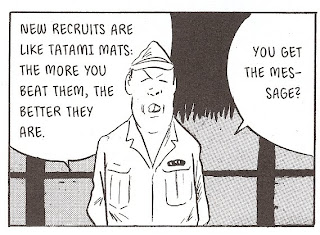 Perhaps Mizuki's account of wartime horrors was his attempt to exorcize his own personal demons (and lingering guilt over having survived). As he writes in the book's afterword, Rabual was one of the worst places to be in WWII for Japanese soldiers, who were considered less than human, and where almost 11,000 of these "subhumans" died during one of the war's bitterest campaigns. As a new recuit, Mizaki was beaten repeatedly for, as one officer in the story remarked, "New recruits are like tatami mats. The more you beat them, the better they are."

"In our military, soldiers and socks were consummables; a soldier ranked no higher than a cat," Mizuki writes. "Officers, NCOs, horses, soldiers: in the military hierarchy, soldiers were not even thought of as human beings, We were instead creatures lower than a horse...But when it came to death, it turns out we were human beings after all."

In other words, only when ordered to die in a pointless suicide charge against superior enemy forces - to go Onward Towards Our Noble Deaths - did the soldiers actually exist in the eyes of the honor-bound military hierarchy.

"Whenever I write a story about the war, I can't help the blind rage that surges up in me," Mizuki concludes. "My guess is, this anger is inspired by the ghosts of all those fallen soldiers." 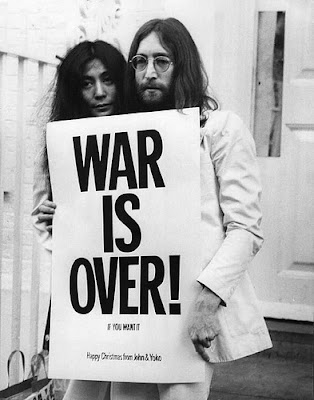 Labels: graphic novels, it was the war of the trenches, jacques tardi, onward towards our noble deaths, shigeru mizuki, war 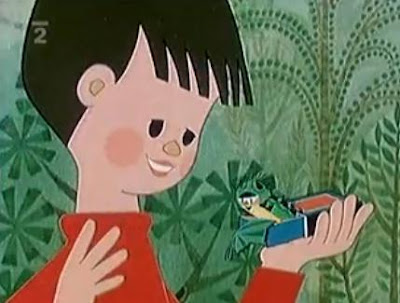 Sametka (aka Caterpillar, The Velvet Caterpillar)
Animated by Zdenek Miler
Based on the story by Norman Colwin
(Kresleny Film, Prague, Czechoslakia, 1967, 14 minutes)
Released in the US in 1971 by Learning Corporation of America

I work at a large public library that still has hundreds, if not thousands, of videos in this, The Digital Age of the DVD. One of the things I most enjoy about shelf-reading "the Stacks" - the movable-shelves storage area that houses most of our educational videos - is discovering old and obscure videos for which there is little or no information. Usually, these are the blandest of the bland in terms of packaging and the scantest of scant in terms of the library's catalog record. I'm talking about a video for which there's basically a black VHS case and a title (typed on an index card!) - and, if I'm lucky, maybe a date of publication, running time, and one-sentence description (often inaccurate) in the library catalog. One such delightful recent discovery matching all of the above criteria was something called Caterpillar, "an animated fantasy about a caterpillar who dances his way to success and fortune as an internationally recognized performer."

Googling this title turned up nothing betyond what I had already learned. In fact, the title, release date, and running time were all inaccurate. But I like animation and I like discovering new videos in our collection on which no previous light has shone. Taking the video home, I was immedialy struck by its style, which I loved and which was distinctly European - this even though the video was credited to Learning Corporation of America - and its bright, simplistic animation and wordless narrative structure reminded me of Czech animator Zdenek Miler's Mole films; Miler, who is considered the Czech equivalent of Walt Disney, created dozens of wordless (for international market appeal) children's film shorts starring his little mole (or Krtek in Czech) between 1956 and 2002 for Prague's Kresleny Film Studio. And there was good reason why Caterpillar looked so familiar - it was a Zdenek Miler film! 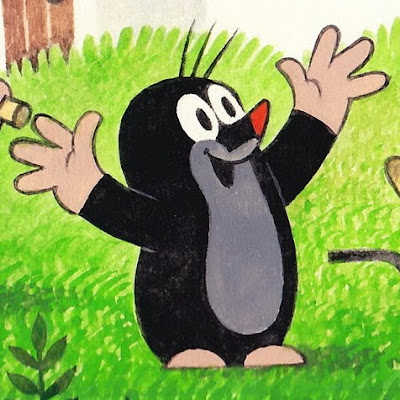 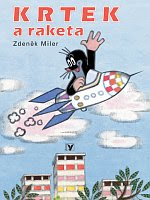 The importance of "the Mole" to Czechs was underscored when Krtek was recently chosen as the mascot for NASA's space shuttle Endeavor - the brainchild of shuttle crew member Drew Feustal, who has indirect Czech roots through his wife. It's rather fitting, as Krtek had previously starred in a 1965 film and book adventure called Little Mole and the Spaceship! Zdenek Miler, now 90years old, was delighted by his fantasy becoming reality: “I never imagined anything like this for Krtek." Miler approved of a toy designed specifically for NASA and of Krtek’s mission logo (as shown below):

OK, back to Caterpillar...

Warning Film Scholars: there's hardly any information anywhere about this film. The most detail I could find on the Web as this forum thread by "DavidVillaJr" (surely not the FC Barcelona soccer star?) at the fedoralounge.com:

"Learning Corporation of America, 1971. The inevitability of change is revealed to a little boy in this animated tale of the caterpillar who danced. One day a little boy playing his harmonica, discovers a caterpillar who dances to his tunes. An entrepreneur discovers both the boy and the bug, and soon the dancing bug and the boy become big business all over the world. Suddenly, one day the caterpillar disappears. The boy searched everywhere, but could not find his friend. Then spring comes, and then one day a beautiful butterfly appears, dancing to the boy's tune. The boy decides to set the butterfly free. Primary to intermediate." 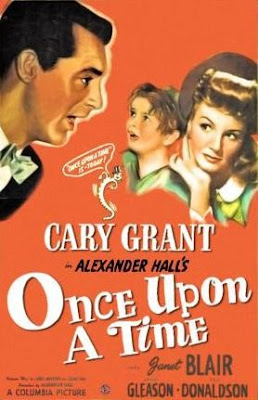 Even more intriquing was another thread at fedoralounge.com by Subvet642 that claimed "There is a live action version of the same movie starring Cary Grant. Once Apon A Time (1944) A Broadway producer finds fame with his new act - a dancing caterpillar." 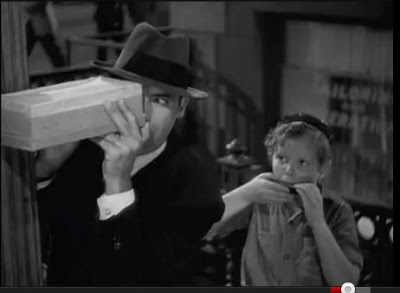 Even weirder: it's true! How had I never heard of this Cary Grant film about a caterpillar that dances only to the song "Yes Sir, That's My Baby!"? A film directed by Alexander Hall with an all-star cast including Janet Blair, James Gleason (as McGillicuddy "the Moke"), Preston Sturges regular William Demarest (My Three Son's Uncle Charlie!), and Ted Donaldson as "Pinky" the mouth-organ-playing boy who discovers the caterpillar "Curly." Turns out that Once Upon a Time was originally a CBS radio play called "My Friend Curly" by Norman Corwin (from an idea by Lucille Fletcher Herrmann).

Watch the opening of Once Upon a Time.


Reading through the thread, I liked one fan's remembrance of how the boy-with-a-harmonica and his dancing caterpillar turned into an overnight, international sensation akin to the Beatles in the early '60s. As he described the boy and the caterpillar appearing on billboards all over the world, making their escape via helicopter from throngs of swarming fans, and even journeying to the Moon to play for astronauts, I knew the film was not only an example of classic animation, but also a cogent commentary on fleeting fame and the inevitability of change. Ah yes, like a caterpillar transforming into a butterfly, life's only constant is change. Or as Heraclitus put it back in the Classical Greek Age, "You can't step twice into the same river." Even George Harrison noted, via Eastern mysticism, that indeed All Things Must Pass. Which is pretty heavy stuff for the Primary to Intermediate set! 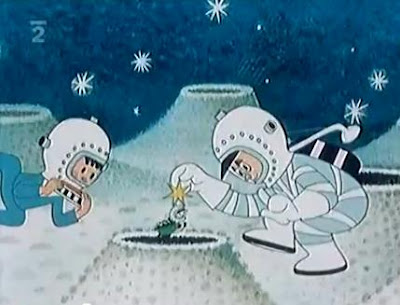 Dancing on the Moon: "One tiny step for man, one giant leap for mole-kind!"

But, as usual with my raging, caffeinated ADD, I have digressed. Back to Caterpillar the film itself. For your viewing pleasure, I have tracked it down on YouTube and included the video clips (in two parts) below: