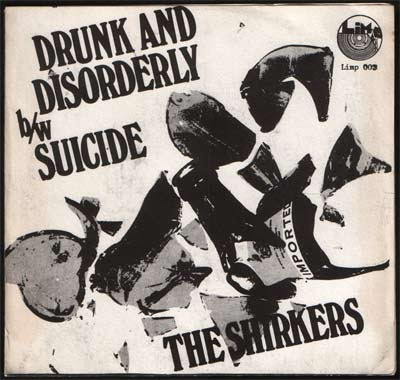 
Serendipity. This great word, whose etymology I learned from Joseph Campbell (it's from the Arabized/Anglicized form of the Sanskrit word for the island of Sri Lanka, which was the inspiration for the Persian fairy tale "The Three Princes of Serendip" - whose heroic trio had a number of adventures by chance), accounts for me coming across this obscure (to a Baltimorean) single by a DC band - while surfing the 'net for info about yet another band!

Both of these trash-punk songs are great (the A-side was later covered by DC punk rockers Black Market Baby), but what blew me away when I started poking around the Internet to read more about this band was the realization that their bass player was none other than Libby Hatch...

...who co-wrote "Drunk and Disorderly" and went on to join Tru Fax & The Insaniacs in 1980 with drummer Michael Mariotte, guitarist David Wells (not to be confused with the former MLB pitcher), and singer-guitarist Diana Quinn. Tru Fax were one of my favorite bands, and their classic "Washingtron"/"Mystery Date" single never wears out its welcome on my phono player. 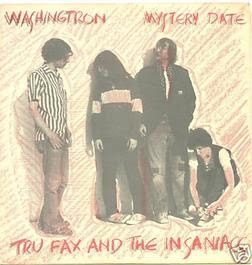 I was good friends with Libby Hatch dating back to my daze playing in Thee Katatonix, and maintained a pen-pal correspondence with her for several years in the pre-Email/texting/Instant Messenger/Facebook era. Libby was a graphic designer by day and I used to look forward to her stylishly decorated letters, always adorned with cool rubber stamp and sticker designs; one of her designs later became her business card slogan - "Turn Adversity Into Adventure" (a slogan I never forgot and continue to quote to this day). I remember Libby being upset by Katatonix frontman Adolf Kowalski's lewd comments about her breasts after we played some gig with Tru Fax, and had to explain to her that he was just playing up to his laddish punk-provocateur persona (what Joseph Campbell, to cite him again, would call his performer's "mask") and meant no harm. 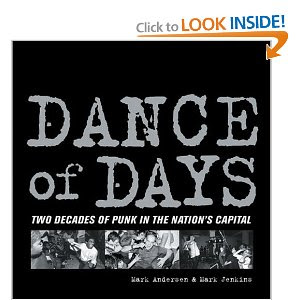 Libby's boyfriend was Mark Jenkins, the Washington City Paper writer who went on to co-write (with Mark Andersen) the definitive history of the DC punk scene of that period, Dance of Days: Two Decades of Punk in the Nation's Capital.

But I lost touch with Libby after '81 and was therefore shocked to read that she died in a motorcycle accident in 1998. (I guess I should have read the introduction to Dance of Days, wherein Jenkins wrote, "My work on this book is dedicated to the memory of Libby Hatch.") R.I.P., Elizabeth Denison Hatch (February 26, 1955 - December 6, 1998). 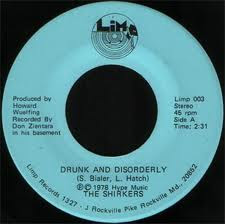 The other Shirkers were noteworthy players as well. Guitarist Thomas Kane was Slickee Boy Kim's brother, who went on play with The Dark and the Velvet Monkees, while drummer Jeff Zang banged the skins in Kim Kane's side project Date Bait. The lead singer was Steven "Stiv" Bailer, with Liz DuMais handling the other guitar and (along with Libby Hatch) backing vocals.

The single was produced by Howard Wuelfing (of Slickee Boys, Nurses fame).

I always loved this record since the first time I heard it in the late 70′s…My band Black Market Baby recorded and released a 7″ version of it in 1986 on the very same label (Limp records)…The Shirkers played one show and released one single and then broke up (true punks!!)..Libby Hatch was the bass player for the Shirkers, she co-wrote the song and sang the high pitched backup vocals in the chorus…Libby was a friend of ours and gave us her blessing to record it. She later went on to play with another well known DC band from the early 80′s, Tru Fax and the Insaniacs…Sadly Libby died in a motorcycle accident several years ago..I think both versions of the song are an excellent tribute to a great lady…Libby Hatch…

Wow, Farrell's recollection that The Shirkers having only played one show and released one single before breaking up must set some sort of record for one-and-done musical productivity. What an amazing story!

According to the Black Market Baby web site, the bass that Libby Hatch played on the "Drunk and Disorderly" was bought by Keith Campbell and given to Mike Donegan, who played it on their version, which was released on Yesterday and Today Records in July 1990. 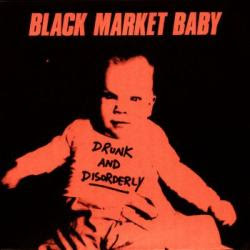 Skip Groff of Limp Records and Rockville's legendary-albeit-no-longer-bricks-&-mortar record store Yesterday and Today Records released a 30th anniversary re-issue of this classic 7″ on marble vinyl (top side LIMP 666 cover, flip side DACOIT 999 cover) in 2008. (To order, see Yesterday and Today Records.) The Shirkers also appear on the The Best of Limp (...Rest of Limp) vinyl compilation record. According to a reviewer at Hyped2Death Records, Best of Limp's version of "Drunk and Disorderly" features a "cleaner but almost guitar-free remix" of the single's "wall-of-mud" sound. 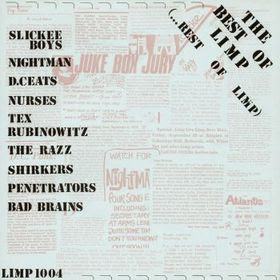 This is a great series, like everything in Hyped2Death's catalog. The Village Voice's Jason Gross called the series "...a better sociological study of white boys gone cuckoo than Lord of the Flies or Kids." (The series also apparently samples cuts from the local music compilation records Best of Baltimore's Buried and :30 Over D.C. for tracks by The Alcoholics, 1/2 Japanese, Nurses, Velvet Monkeys, and Da Moronics.)

For a band that was gone quicker than a New York minute, The Shirkers are amply represented on record and (thanks to mp3s) on the 'net, ensuring that the memory of Libby Hatch lives on forever. 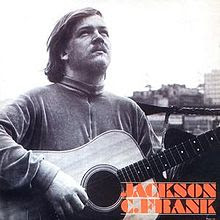 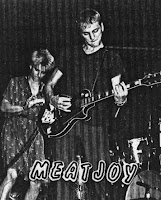 One of my favorite movies last year was Sean Durkin's subtle psychological drama Martha Marcy May Marlene, which not only addressed the dangerous allure of cults but also introduced many viewers (like me) to obscure '60s folksinger Jackson C. Frank. Two of Frank's songs appear in the film: a cover version of "Marcy's Song" (performed by actor John Hawkes - formerly guitarist "John Boy Perkins" in legendary Austin, Texas band Meat Joy - who also wrote and strummed "Bred and Buttered" for the soundtrack of Debra Granik's 2010 indie hit Winter's Bone) and "Marlene" (which plays over the end credits).

Director Durkin himself only discovered Frank after Googling the Internet for songs matching the names "Marcy" and "Marlene" and finding, as if by fate, "Marcy's Song" and "Marlene" as back-to-back album cuts on Frank's lone eponymous 1965 album, Jackson C. Frank (rereleased in 1978 as Jackson Frank Again). (For a less-creepy movie, Durkin could have used Todd Rundgren's "Marlene," the first Marlene song I think of - but that's just me being a Todd toaster.)

Talking about his movie's soundtrack to Sight & Sound magazine, Durkin explained, "I always try to find ways to show an emotion without having to hear someone talk. I thought playing a song named after Martha - supposedly named after her - would be a way to do it. They're ["Marcy's Song" and "Marlene"] rather beautiful songs, but they're very painful too, underneath the surface."


Jonathan Romney, writing in Sight & Sound, describes the importance of John Hawkes' rendition of this song to the film's narrative. In a crucial scene, Hawkes' character Patrick - the charismatic-but-manipulative leader of a rural community of outsiders (the word "cult" is never uttered in the film) - plays the song for Martha, whom he has rechristened "Marcy May."

Like Manson - who was a songwriter, or at least managed to persuade The Beach Boys' Dennis Wilson that he was one - he also has a way with a tune. In a memorable scene, Patrick - who, as incarnated by Hawkes, resembles Bruce Springsteen on a hunger strike - charms the newly renamed Martha with a song supposedly just for her...As performed by Patrick, this sweet, contemplative number becomes at once coy and sinister in its reduction of its love object to a lifeless image: "Well, she's just a picture." Frank's starker "Marlene," played over the end credits, is no less unsettling.


In terms of tone, Frank's voice reminds me of the dark, smokey timbres of Richard Thompson. No wonder Frank eventually found his way to be involved with Sandy Denny, erstwhile singer with Thompson's Fairport Convention.

How obscure was Frank? Well, his Wikipedia entry reads: "Jackson Carey Frank (March 2, 1943 - March 3, 1999) was an American folk musician. Although he released only one official album in his lifetime and never achieved much commercial success, he is reported to have influenced several better-known singer-songwriters such as Paul Simon and Nick Drake." 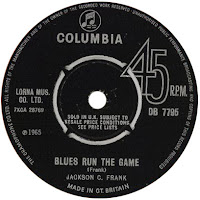 In fact, Paul Simon produced Frank's album back when the pair were playing the folk club circuit in England. Frank was allegedly so introverted during the recording sessions that he asked to be shielded by screens so that Paul Simon, Art Garfunkel, and Al Stewart (who also attended the recording) could not see him. The album's most famous track, "Blues Run the Game," was later covered by Simon and Garfunkel (it appears as a bonus track on the 2001 CD reissue of The Sounds of Silence), Bert Jansch, Counting Crows, and even privately recorded by fellow introvert Nick Drake (look for it on the 2007 compilation CD of home recordings Family Tree).


And here's Nick Drake's take on "Blues Run the Game."


Another Frank song, "Milk and Honey," appeared in Vincent Gallo's film The Brown Bunny, and was also covered by Fairport Convention, Nick Drake, and Sandy Denny (whom Frank dated for a while).


Frank's life was truly a hard-luck story. According to Wikipedia, Frank took a trip to New York City in 1984 "in a desperate bid to locate Paul Simon, but he ended up sleeping on the sidewalk." Living on the street and frequently admitted and discharged from various institutions, he was treated for paranoid schizophrenia and later was shot in the eye and blinded while sitting on a bench in Queens. He died of pneumonia and cardiac arrest in Great Barrington, Massachusetts on March 3, 1999, at the age of 56.
Posted by Tom Warner, Almost Hip Guy at 9:12 AM No comments: