"Forbidden Alliance" is Robbie White and Weasel's 9 a.m-to-noon Sunday morning retro rock program on Takoma Park's WOWD-LP (94.3 FM) radio station. These two DJs are music historians who know a thing or two because they've heard a thing or two, especially when it comes to the DC music scene. (The program title itself is taken from a Slickee Boys song on their 1979 Limp Records EP.)


But one of the things they also know all too well is the legacy of Baltimore's Marble Bar, which is lovingly celebrated whenever LesLee Anderson and Chick Veditz make the trek down to 7014 Westmoreland Drive in Takoma Park, and the October 28, 2018 program was no exception. This Halloween Weekend show was all Treat, though there were some Trix (Trixy & The Testones, to be specific).


Robbie White & Weasel hosted former Marble Bar empress LesLee Anderson and Slickee Boy Kim Kane (whose DC band played the Marble enough times to be considered honorary locals) live in studio, while Baltimore's Legendary Records maestro Chick Veditz "curated" (as the Millennials so love to say) a customized playlist for the occasion. Following an opening 90 minutes of timely horror-themed Halloween music, Chick spent the next half of the show spinning the indie punk-pop platters that mattered to those who lost their marbles at The Marble during its glory years from 1977-1987. It was great to hear Chick, LesLee and Kim reminisce about the Marble and DC bands and respective club circuits - and to hear that LesLee is writing a memoir! (As The Replacements sing, "I'll buy, buy, buy, buy, buy!") The fundraiser show also raised over $11,000 dollars, including a donation from Dundalk philanthropist Adolf Kowalski.

Amy and I tuned in just as Robbie played The Accused's "Time Out" back-to-back with Trixy & the Testones' cover of "Palisades Park." Chick pointed out that both bands featured Kraig "Trixy" Krixer, whom he characterized as "the best or one of the best" guitarists to come out of Charm City during this era.


Agreed, but I'd have to add that B-more's Guitar God was a three-headed deity, like King Ghidorah, that also included the noggins of Mark Harp (Mark "Harpo" Linthicum of Null Set, Cabal, Beatoes, etc., etc.) and Charlie Gatewood (Mr. Urbanity of Thee Katatonix and Dark Carnival). Alas, only Gatewood is still with us, Krixer having passed in 2011 and Harp in 2004. (On the DC side, that triumvirate of six-stringed samarais would have to include Tommy Keene, Slickee Boy Marshall Keith and Danny Gatton, natch.)

It was so fun to hear Baltimore bands get their due, among them Dave Wilcox's Pooba ("Poison," featuring Kraig Krixer), Lambs Eat Ivy ("Serpentine"), Judie's Fixation ("Martyr Me"), Thee Katatonix ("Ordinary Sunday), Da Moronics ("Mr. President), Food for Worms ("Pink Dishes"), The Dark Side ("Fun in Nicaragua"), The Raisinets ("Stay Limp" - FYI, Chuck Stephens and Bob Greenberg of The Raisinets were one of four bands that played at Chick's inaugural Anniversary Party in July 1978, along with The Reason, Loose Shoes Rhythm Band and, of course, The Slickee Boys), Elements of Design ("I Love a Man with Rhythm," from Merkin Record's 1989 Seedy Sampler record) and Braver Noise, featuring former members of The Bollocks and Law and Order, and whose "The Smiths Have Gone To Heaven" (also from Merkin's Seedy Sampler) I had never heard before. How could I have missed this classic, replete with signature Johnny Marr guitar riffs? Thanks Chick!


And it was great to hear LesLee give props to the gals of the Marble Bar, notably Rosie Wampler (she of a million bands - including Elements of Design - all of them great), Cindy Borchardt (The Beaters, The Monuments, Judie's Fixation)...

...and former John Waters star Edith Massey ("Punks, Get Off the Grass").

LesLee reminded listeners that Edie Massey used to celebrate her birthday with an "extravaganza" at the Marble Bar during her "punk" phase. All agreed that Edie was a sweetheart, somebody who brushed off a heckler at a 9:30 Club show by saying, "Oh, I don't mind. That fella's just having a bad day." 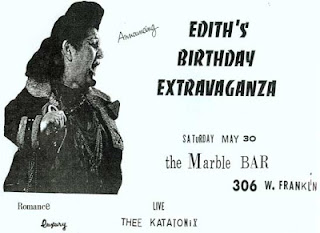 Speaking of Mr. Waters' Dreamlander stars, Chick also had Robbie & Wease play "Born To Be Cheap" by erstwhile pop diva Divine ("Born To Be Cheap," from his 1982 appearance Live on David Letterman).


People sometimes forget that Edie wasn't the only Waters pop star. Mark Harp, for one, was a big fan of Divine's records - he even asked Divine about his success on the UK Pop Charts when he was in the audience during a 1984 Divine-Waters appearance on WJZ-TV's "People Are Talking"!


And LesLee revealed that she went to school with another Waters alumnus, Cookie Mueller! (I really want to read LesLee's memoirs now!). She then asked if anyone had seen  the new "I'm So Beautiful" Divine mural, painted by Gaia, on the side of the Earl Court Apartments on E. Preston Streets between St. Paul and Calvert Streets (as shown below).


On the DC damsels side, The Dynettes' Cheri Grasso and Ruthie Logsdon of Ruthie and The Wranglers got shout-outs as well, and even stopped by the studio to help with the pledge drive. (Needless to say, Cheri's bandmates Martha Hull - the only female Slickee Boy - and Diana "Tru Fax" Quinn deserve shout-outs as well!). I hope this Forbidden Alliance (of Balto-DC bands as well as Baltimore-Montgomery County DJs - don't forget, Weasel's Wild Weekend starts on Fridays and Saturdays up in Towson on WTMD 89.7 FM) continues to be a regular format and that WOWD continues to WOW and D-light.