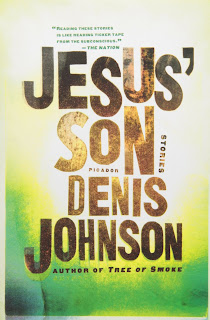 I just finished reading Denis Johnson's loosely-connective short story collection JESUS' SON. At first, I didn't get it. Like SEINFELD, they appeared to be stories about nothing. But then I heard the words, felt the sentences, and saw the images evoked around the fuzzy edges of that nothing, and it reminded me of prose poetry in the vein of Baudelaire's PARIS SPLEEN or Arthur Rimbaud's A SEASON IN HELL, with bottom-feeder characters straight out of James M. Cain or Jim Thompson. Taking its title from Lou Reed's "Heroin," JESUS' SON chronicles the one-day-at-a-time travails of society's losers - druggies, cons, cripples, the indigent, the elderly, the infirm, the mentally ill (my peeps, in a sense) - as they struggle to find meaning and cling to the hope that somewhere "there might be a place for people like us." Some of Johnson's sentences really stick..

Describing a nursing home woman: "Her feet pointed left, her head looked to the right, and her arms twisted around her like ribbons around a Maypole"...

Observing a tired belly dancer: "She seemed to be thinking about something far away, waiting patiently for somebody to destroy her."

Skies are "as blue and brainless as the love of God" or "a bruised red shot with black, almost exactly the colors of a tattoo" or filled with "Midwestern clouds like great grey brains."

Of a wife who shot at him and missed: "It wasn't my life she was after. It was more. She wanted to eat my heart and be lost in the desert with what she'd done, she wanted to fall to her knees and give birth from it, she wanted to hurt me as only a child can be hurt by its mother."

Or, an existential moment following a fatal car wreck: "I looked down into the great pity of a person's life on this earth. I don't mean that we all end up dead, that's not the great pity. I mean he couldn't tell me what he was dreaming, and I couldn't tell him what was real."

I disagree. Denis Johnson's luminous prose tells us what he's dreaming while telling readers what's truly real - the hopes and desires and the faults and failures that we all share, regardless of our station in life. It's too bad he's no longer with us, having passed away from liver cancer on May 24, 2017. Random House published a posthumous short story collection, The Largesse of the Sea, in January 2018. I look forward to reading it!
Posted by Tom Warner, Almost Hip Guy at 1:27 PM No comments:

The Monuments/Judie's Fixation return from the '80s @ Raven Inn 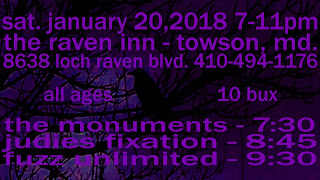 Fans of these legendary bands called the 1980s (first tried to text but no answer) and demanded The Monuments and Judies back, and were rewarded with a delightful playlist of classic Rock, R&B & Motown covers. (We didn't stay for Fuzz Unlimited - all apologies! - as I had to work the next day.) 'Twas a fun, fun, fun night! And great to see old friends who lost their Marbles at the Congress Hotel - Katatonix Adolf Kowalski Charles Gatewood and Ed Linton, the Rockin' Robins Robin Linton and Robyn Webb, Coffin Cutie Mike Hearse, Ron DeNunzio, Craig Stinchcomb, Gayle & Michael Maxwell, Marty & Leslie Fuquinay Miller, Patti Codd (whose Biscoff cookie white fudge platter was the hit of the bar food on offer!), Keith Worz, Jenny Beetz, Scott Pendleton, Darla "Jean" German, Sandels Hogg Morrow and ace photographer Jim Moon (who has taken more great pics of the Monuments than anybody!) - turn out to support Lumpy & Cindy Borchardt and Co.! 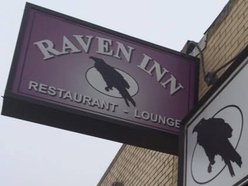 First up...the monumental return of The Monuments at the Raven Inn! 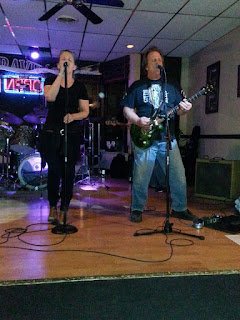 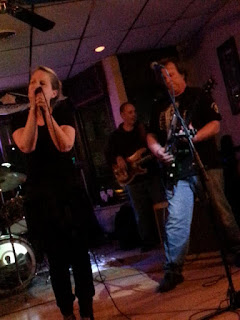 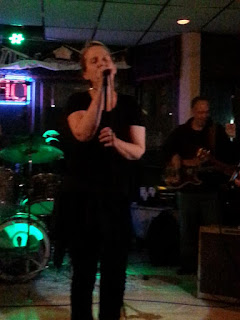 I never knew any musicians in The Monuments other than Cindy and Lumpy. For the record, the rest of tonight's band was comprised of drummer Greg Phillips, lead guitarist Russell Stone and erstwhile Judie's Fixation bassist Jay Turner.

And, yes, that was "Lumpy," (aka "Brian Jones," aka William Sutherland), playing the beautiful ax he made while working at Paul Reed Smith, with exquisite paint job courtesy of Betsy Green!

The Monuments always played - and will continue to play - classic '60s and '70s rock, garage and R&B gems because the tunes they fine-tune are, well, timeless classics! (That's why they call it classic rock, folks!) Below is a typical setlist... 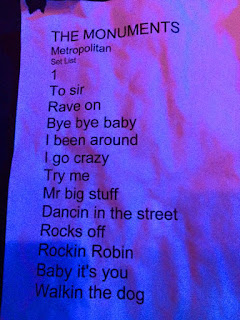 ...I can't recall every song they played this night, but the Supremes and Stones and Rufus Thomas were definitely there in the mix, as well as "Rockin' Robin" ("Thankfully not dedicated to me," said Robin Linton, who as a Robin has heard a lifetime of references to the 1958 Bobby Day hit) and a highlight was the smokin' twin-guitar jam-out between Russell and Lumpy on the Stones' "Rocks Off."


The Monuments' set closer was "Stop in the Name of Love," to which I would reply: "In the name of your fans' love, don't stop, Monuments!" 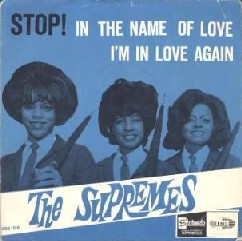 Next up...the decidedly fixated return of Judie's Fixation (or FUXation, as Amy Warner says) at Raven Inn! The last Judie's reunion I can remember was in 1983 at the Marble Bar (as shown on the flyer below), following their first reign from 1978-1980.


The boys were back in town - William Sutherland, Craig Stinchcomb (aka "Dick Goesinya" and "Jacques Strap") and Henry Cross - and while legendary frontman Vaughn Keith (1950-1990, R.I.P.)'s shoes are a big void to fill, I think it's fitting that effervescently cool Cindy Borchardt, pulling double-duty after opening with The Monuments, filled them on the 1st anniversary of The Women's March (how's that for timing?). 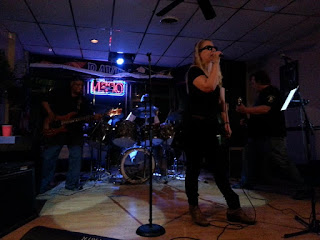 There were a number of different Judies members over the years - besides the dearly missed, charismatic frontman Vaughn Keith (aka “Ben Wah”), their ranks included original guitarist Bill Smith ("Bill Bored," who was replaced by original bassist Lumpy), bassists Wayne Murphy (G.C. Murphy) and Jay Turner, and lead guitarist Tim Campbell (aka "Fido Fetch" and "Phideaux Phelch," and also an ertswhile Monuments guitarist) - but tonight's lineup (sans Vaughn Keith, obviously) was the one I remembered best.

It was a great set, visually highlighted by fanboy Keith Worz's inimitable dancing prowess (earning him a "Martyr Me" dedication!)... 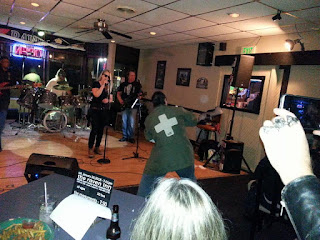 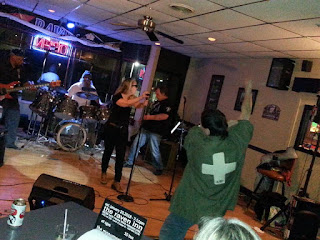 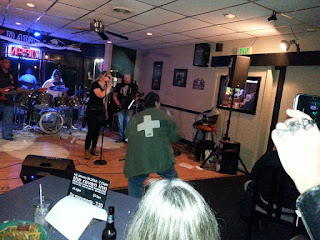 Seeing Keith pump his fist in the air and implore the band on reminded me of his passion for the punk bands of the Marble Age. And, of course, the unique dancing style. I remembered a 1980 Katatonix gig in Annapolis where his frenetic pogo dancing so impressed a local music critic that he got singled out in a newspaper review for resembling "a New Wave Jerry Lewis, the clumsy Jerry Lewis character who was always falling over something in the movies. He danced in jerky movements, as if he was plugged into a Mix Master going full bore." (Keith's shout-out in the July 24, 1980 Arundel Living Sun is shown below.)

Musically, the set was highlighted by such standards as "Severe Weather" (dedicated to Rockin' Robin Linton, a former Marble Bar bartender)...

..."Chinga," "Martyr Me," "Kryptonite" and signature crowd singalong "Judy in the Alley"...

Three of the nine songs in their set were covers - "Mr. Cool" (by the post-New York Doll, pre-W.A.S.P. Arthur Kane and his Killer Kane Band), Barry McGuire's "Eve of Destruction" (never more relevant than today with Trump and Kim Jung Un talking smack over who has the biggest nukes button!), and Bobby Fuller's "I Fought the Law" - which is probably to be expected when you reform and start playing again after more than 35 years apart.

I only wish they had dusted off their cover of Arthur Conley "Sweet Soul Music," wherein Vaughan changed the lyrics to name-check other Marble Bar punk bands of the time: “Do you like good music? (Yeah Yeah)/Like Da Moronics? (Yeah Yeah)/And Thee Katatonix? (Yeah Yeah).” But then, perhaps that was too moribund a reminder that those bands too had disappeared over the years. 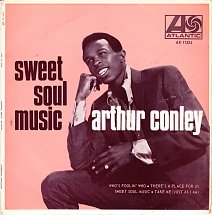 Regardless, tonight's performance brought back fond memories of glory days at the glory hole we called The Marble Bar, where the Judies ruled the roost and everyone's marbles tended to get tossed!

After their set, Lumpy thanked everyone in the audience for showing up and sent a special shout-out to Adolf Kowalski (who did an admirable job holding up the bar next door all night), who is financing a long-awaited Judie's Fixation CD! To date, only "Martyr Me" has ever been released, and that only on the extremely rare (and vinyl-only) 1978 Limp Records compilation :30 Over DC - Here Comes the New Wave!. (Curiously enough, the same recording of "Martyr Me" also turns up on the CD-R compilation Hyped To Death #22: US and Canadian LP Punk, R-to-Z - begging the question, where exactly does J fall under R-through-Z in the alphabet? Whatever!) Other than that, there are only a smattering of live songs recorded on what drummer Craig Stinchcomb described as a "crappy cassette recorder and its equally crappy microphone" by their former manager Frank "Big C" Yates (who passed away on June 25, 2014); these raw recordings were later digitally salvaged by bassist Henry Cross and uploaded to Soundcloud. (See "The Judie's Fixation Tapes" at baltimoreorless.com for details.) 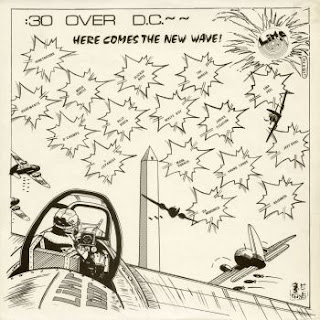 So the Judies will be martyred no more - they will have an official CD release sometime in the near future! On the Marble Bar Facebook group page, Adolf added, "Thee Katz [Katatonix] are CONSIDERING doing one last show before we all die...probably open at the Judies CD party...stay tuned."


In the meantime, Lumpy will continue to pluck his upright bass playing bluegrass-flavored classics from the Great American Folk Songbook with Darla Jean & The Somethin' or Others, while Craig Stinchcomb will hopefully still motor on with The Motor Morons (too bad we missed his Motor Moron bandmate, the irrepressibly perky "Blade," playing keyboards with Fuzz Unlimited tonight!)

Finally, below are snapshots of the Monuments and the Judies at their prime in the early '80s. 35 years later, time has still not dimmed the glory of their deeds!