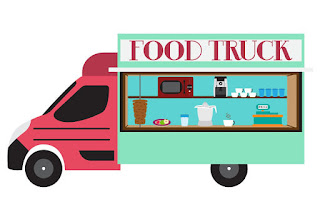 One of the few perks of living in this dystopian proletarian community of pickup trucks and pick-up trash (where you can spot a discarded shopping cart or PPE mask every other block - sometimes even a pair of "Bootay"-brand panties) is the steady availability of weekend food trucks just around the corner from our house in the parking lot of Babcock Presbyterian Church, 8240 Loch Raven Boulevard. We used to see them mostly in the summer, but with the dining and gathering restrictions associated with the 2020 Covid-19 pandemic, they have become a regular feature and something to look forward to each week. Like the obsessive cult of trainspotters, we have become obsessive foodtruckspotters, regularly checking the Knettishall Community Association Facebook page to see that week's mobile food vendors. For neither snow nor rain nor heat nor gloom of night stays these comestible couriers from their appointed rounds. Yes Virginia, there IS a Santa Claus. And yes, Loch Raven Villagers, there IS a Food Truck a-comin'! BELIEVE!

For latest postings, always check the Knettishall Community Association Facebook page:
https://www.facebook.com/knettishalltowson. You have to scroll down a bit because, for some reason, an old post about a vehicle running over the Knettishall sign is permanently embedded as the lead story of the page. (It's time to move on, Knettishall.) Oh, and while waiting for your food, you can walk around the little labyrinth that's behind the church facing Loch Ness Road; blink and you miss it, partially obscured as it is by surrounding trees, but it's well worth a merry-go-round!

So far, Amy and I have lauded the following "Top of the Slops" vendors on our personal Hit Parade at Loch Raven's Trucks-a-palooza: 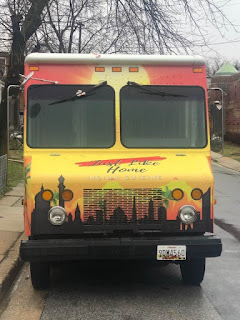 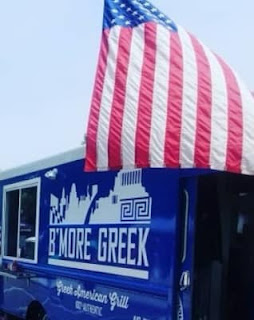 Those are the trucks we've sampled so far. And we haven't yet sampled Mi Ranchito, the Tex-Mex truck that is permanently parked in the Exxon station lot at the intersection of Putty Hill and Goucher Boulevard across from the Red Robin and Calvert Hall. I hope there're more trux redux to come this winter! In the meantime, keep on truckin'! This winter I'll be truckin' my blues away! 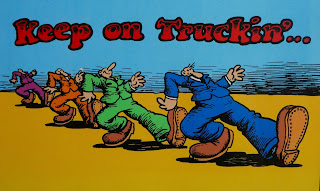 Posted by Tom Warner, Almost Hip Guy at 8:00 AM