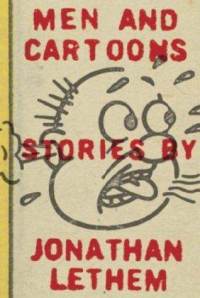 I have been a fan of Jonatham Lethem ever since I read his 2009 novel Chronic City, which starred the one-of-a-kind brilliant eccentric Perkus Tooth (who in turn reminded me of a one-of-a-kind brilliant eccentric librarian I worked with). Set in Upper East Side Manhattan, Chronic City unraveled a tale of a circle of friends that included a faded child-star actor (Chase Insteadman) whose astronaut girlfriend is lost in space, a cultural critic squatter (Perkus Tooth), a hack ghost-writer of autobiographies (Oona Laszlo), and a city official blowhard (Richard Abneg), joined together by their love of smoking pot and online bidding for chalices.

I subsequently picked up a collection of his non-fiction essays, The Disappointment Artist (2006), which Lethem described as "a series of covert and not-so-covert autobiographical pieces." I was impressed by his love of Western pop culture - especially the films of John Ford ("Defending The Searchers") and John Cassevetes ("Two or Three Things I Dunno About Cassevetes") and the science fiction worlds of Philip K. Dick ("You Don't Know Dick") - and realized we had a lot in common in that regard.

Like Michael Chabon, Lethem's work is also clearly influenced by his love of comics (hey, he wrote a novel called Fortress of Solitude!) and nowhere is this more obvious than in the nine stories collected in Men and Cartoons. This short story collection is written in a variety of styles and, while I prefer his narrative fiction ("Vivian Relf," "The Glasses," "Planet Big Zero") more than his sci-fi fantasies (the Dick and Haruki Murakami-flavored "Access Fantasy" and "The Dystopianist"), the pieces informed by his love of Marvel and DC comics - the geeks who dressed up as superheroes in "The Vision" and the actual all-too-human titular superhero in "Super Goat Man" whose powers do him no good (he rescues a paper clip!) - are the ones that stick with me most. 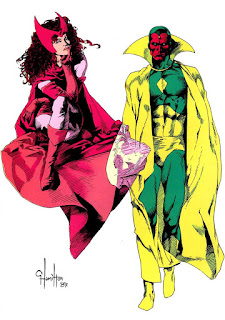 THE VISION: Described as "a story about drunken neighborhood parlor games, boys who dress up as superheroes, and the perils of snide curiosity," this story name-checks both The Vision and The Scarlet Witch, two superheroes originating in Marvel Comics. The Vision was actually created by the writer-artist team of Joe Simon (Superman) and Jack "King" Kirby back in 1940 when the "Golden Age" Marvel line was known as Timely Comics, but later resurfaced in the late '60s in Roy Thomas and John Buscema's The Avengers and continued in different permutations up through the present. The Vision's wife was the Scarlet Witch and the short story makes interesting use of their union in its story about a superhero-worshipping nerd who grows up and finds companionship in the world of fantasy role-playing.

ACCESS FANTASY: Described as "part social satire, weird detective story," this one reminded me most of the Philip K. Dick influence, though it's not among my favorites. In fact, I found it taxing and predictable, though I liked its vision of a world in which people are divided into privileged apartment dwellers and "Road Warrior" commuters trapped in endless traffic jams. The commuters all have VCRs in their cars and watch tapes advertising apartment complexes; in one, the narrator thinks he spots a murder (this reminds me of Decker spotting the Replicant Zhora out of the corner of a Polaroid he enhances in Blade Runner - which of course was Riddley Scott's adaptation of Dick's "Do Androids Dream of Electric Sheep?"). He meets up with an attractive model and together they go around as flesh-and-blood billboard advertisements for beer and pens. Until they knock on one door too many.

THE SPRAY: Another sci-fi rumination described as "a simple story about how people in love deal with their past." In the future, police use a spray at crime scenes to see what's missing - the items people lost during break-ins, supposedly the things they value most. The spray turns an empty space where a TV set was, for example, into a salmon-colored representation of the missing boob tube - one you can put your hand through, because it's an illusion. But it's a simple matter of time before a playful couple try it on themselves to see what they're really missing, which turns out not to be material possessions but their former lovers. Awkward!

VIVIAN RELF: This is rightly described on the book jacket as a "tour de force about loss" - even though it's loss of a connection about disconnection. Doran Close meets a girl named Vivian Relf at a party and both parties are convinced they've met before, but they haven't. In fact, they have nothing in common except that they keep running into each other as the years progress. For the narrator, each "strangely haunting" encounter becomes a missed opportunity that comes to define his life. Brilliant.

PLANET BIG ZERO: The narrator's boyhood friend grows up to be an aimless slacker who comes back t o visit and rekindle their friendship. The narrator tries to reconnect by featuring his friend in his weekly comic Planet Big Zero, to disastrous results. You can't go home again. Even in comic strip panels. 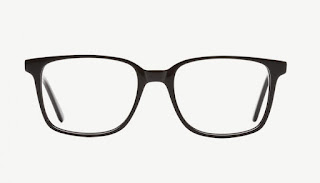 THE GLASSES: My favorite. Reminds me of work! A simple story about two opticians playing Good Cop/Bad Cop with a dissatisfied (worst-case complainer) customer. A battle of wills in which an angry man who insists there are scratches on his lenses sits with his hands at his sides for as long as it takes ("I got all the time in the world!") while observed by the doubting opticians ("We've got forever. We'll wait it out") who insist he's scratching the glasses with his hands. Kafka could have written this one! Truth is stranger than fiction and this at times surreal situation is exactly the kind of stuff that goes on in real life, albeit it touched with only a slight exaggeration that lands it in the realm of fiction.

THE DYSTOPIANIST, THINKING OF HIS RIVAL, IS INTERRUPTED BY A KNOCK AT THE DOOR: My least favorite story, this "Borgesian tale that features suicidal sheep" won a Pushcart Prize when first published in Conjunctions. A little too long-winded for me, though the talking sheep angle made me think back to Murakami's Wild Sheep Chase. 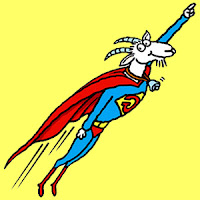 SUPER GOAT MAN: Described as a "savagely funny expose of the failures of the sixties' baby boomers, and of their children," the story tracks the career of a minor comic book superhero named Super Goat Man. Super Goat Man battled minor villains like Vest Man and False Dave until the day he gave it all up to live in a hippie commune and fight the system through non-heroic social activism. He eventually ends up getting a chair at an East Coast college teaching something called "Dissidence and Desire: Marginal Heroics in American Life 1955-1975." But the narrator has always resented him and the era he represented, cruelly and jealously rebuking him at the end when it's revealed that his wife once had an affair with the horn-rimmed, cloven-hoofed hero.

THE NATIONAL ANTHEM: Name-checks James Carr's "The Dark End of the Street" as an adulterous couple's theme song for their shared extramarital deceptions. Made me think of the great version of this song by Gram Parsons and the Flying Burrito Brothers.

Bob Dylan's "Ninety Miles an Hour (Down a Dead End Street)" also gets mentioned. It's an amusing story, nothing more.

All in all, this collection of Lethem's short stories highlights his ability to write in a variety of styles, with his love of sci-fi, hard-boiled detectives and comic books more than evident. Still, I like it when his stories stick to the real world, which is why "Vivian Relf" and "The Glasses" were the most rewarding to me, although "The Vision" and "Super Goat Man" certainly are memorable musings about the influence of fantasy-based pop culture on Baby Boomer geeks like myself.
Posted by Tom Warner, Almost Hip Guy at 8:12 AM