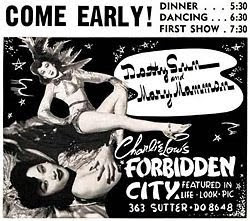 Thank God for Pratt Library for owning this out-of-print documentary on Charlie Low's famous San Francisco nightclub, which opened in 1938 and was still in business up through 1972. Famous because it was the first to feature an all-Asian entertainment cast catering (mainly) to white audiences that were too scared to go into Frisco's Chinatown. Having just seen the 1961 Rodgers & Hammerstein musical Flower Drum Song - whose Celestial Gardens nightclub was modeled after Forbidden City - I wanted to learn more about the source nightspot, and I'm glad I did. I got to see the Chinese Sinatra, Ginger Rogers and Sophie Tucker, as well as hear stories about the challenges facing Asian-Americans during World War II and afterwards. Many performers at Forbidden City were actually Japanese-Americans (white audiences couldn't tell the difference) and in at least one case, had to stop working there during the war when all persons of Japanese ancestry had to report, by law, to internment camps (so much for taking their act to Hollywood). I was particularly struck by "Chinese Sophie Tucker" Toy Yat Mar's recollections about touring the segregated American South and not knowing which bathroom to use - the one for Blacks or Whites. Some Chinese in her touring company used the Black restrooms, others the White. It reminded me of my half-Japanese girlfriend's dilemma when she fills out forms that ask ethnicity (she always opts for "Other"). And I liked how one Chinese dancer described a Texas town as being really small. "How small was it? It didn't have one Chinese restaurant - and every town in America has at least one!"

From IMDB:
"It was the swinging 30s. The big bands of the 40s. It was San Francisco night life Baghdad by the Bay. And the crowds were packing the nation's premiere all-Chinese nightclub, Forbidden City. Like the Cotton Club of Harlem which featured America's finest African American entertainers, Forbidden City gained an international reputation with its unique showcase of Chinese American performers in eye-popping all-American extravaganzas. Part That's Entertainment and part PBS, Forbidden City, U.S.A. captures this little-known chapter of entertainment history and takes it center stage."
Posted by Tom Warner, Almost Hip Guy at 7:01 PM